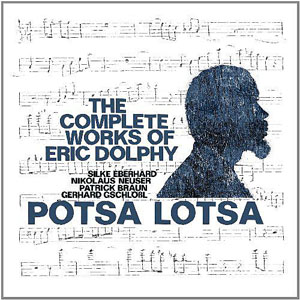 The great multi-instrumentalist/composer Eric Dolphy spent almost as much time being criticized in his career as he was praised. Remarkably, there was dissension in some critical circles at the time about his abilities as a performer and writer.

In the infamous cover story in the April 1962 issue of Downbeat Magazine, Dolphy and his employer at the time, John Coltrane, found themselves in the precarious position of having to "Answer The Jazz Critics": "What I'm trying to do I find enjoyable. Inspiring-what it makes me do. It helps me play, this feel. It's like you have no idea what you're going to do next. You have an idea, but there's always that spontaneous thing that happens."

That feeling of spontaneity can also be felt in Dolphy's compositions. Though harmonically complex, much of his written music felt like a framework for his unique brand of improvisation. In an attempt to reexamine the great musician's importance as a composer, German saxophonist Silke Eberhard has assembled a collective of exemplary European musicians as Potsa Lotsa—so named from the alternative title of a Dolphy composition---in tribute to his imaginative and innovative music. Unlike the excellent Harold Danko CD Prestigious (Steeplechase, 2001), which also focused exclusively on Dolphy and fitfully recreated the best of the reedman's tunes in traditional band setting, Potsa Lotsa's aim is to record all 26 of the master's known tunes in a completely new context.

The effect of The Complete Works of Eric Dolphy is both startling and apt, considering the nature of Dolphy's predilection for difficult and far-reaching experiments. Every tune on this two-disc set runs an average of five minutes, which helps keep the music accessible, despite the unconventional choice of a drummer-less/piano-less quartet.

Eberhard's arrangements of the best-known Dolphy tunes, such as "Hat and Beard," work exceptionally well, where the melody is stripped down to its essence. Without the reedman's own improvisatory approach, however, Dolphy's compositional conceptions take on a new light. Not that the musicians don't get to stretch out, with trombonist Gerhard Gschobl smearing notes to fine effect on "Iron Man."

Because of the spacious arrangements on many of the tunes, the music sounds free, especially on "Gazzelloni." Yet the band doesn't forget to swing occasionally, as on the rarely heard "Miss Movement," which has a lovely, Thelonious Monkish quality.

Complete Works does it job well, making a formidable argument that Dolphy's musical contributions to jazz history are not confined to his superb recorded performances alongside Coltrane, Charles Mingus, and his own excellent bands.