By ANDREY HENKIN
November 2, 2005
Sign in to view read count 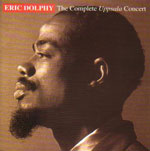 One of my pet theories is that one of the kickstarts for creative indigenous jazz in Europe was the tours undertaken there by Eric Dolphy as a leader (late summer 1961, summer 1964) and with John Coltrane (winter 1961) and Charles Mingus (summer 1964). The passage through the region of such an iconoclastic figure as Dolphy, particularly at these two hypercreative moments for him, must have had some effect on the local musicians who heard or, in some cases, played with him. Those tours were documented and are back in the forefront with a two-disc reissue of a Swedish concert from September 1961.

The ninety-minute performance is a quartet date from Uppsala, just northwest of Stockholm. Joining the leader's alto, bass clarinet, and flute are pianist Ronny Johansson, bassist Kurt Lindgren, and drummer Rune Carlsson. Listeners of European jazz are no doubt aware of the future credentials of the rhythm section, and research shows a handful of sessions by the pianist in the '70s.

The sound quality of the discs is sub-par, lacking the dynamics to allow the listener hear what the pickup rhythm section was doing. But that is of minor concern—Dolphy is, as always, the main attraction. What sets this disc apart is the material, in both good and bad ways. Good because the unfamiliarity of the group resulted in lots of rare covers played for the only (or almost only) time, such as "Laura (Mercer-Raskin), "52nd Street Theme (the Monk theme appearing twice briefly), "Bag's Groove (Milt Jackson), and "When Lights are Low (Carter-Williams). But this left little room for Dolphy's own compositions; indeed, only "245 is self-penned.

While not the revelation that Blue Note's The Illinois Concert was when it came out, this is good material to supplement the better recorded Berlin Concerts (Enja) or Eric Dolphy in Europe (Prestige). You might hope for a "Miss Ann, "Serene, or "The Prophet, but Dolphy had the Midas touch with any material, and his presence made any group reach for the sublime. He gets the chance to stretch out in Sweden—several of the tunes well exceed ten minutes, providing fascinating opportunities to hear Dolphy working out ideas and concepts that would bear fruit for him in a couple of years (before his death in 1964) and for Europe a little after that.