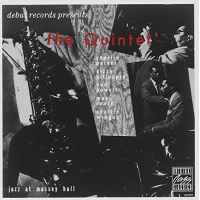 In 1953 the jazz genre called Be Bop, Bop, Re Bop, or Modern Jazz had fully matured and was settling in as the established mainstream rather than the cutting edge movement it had been in the early 1940s. Jazz as a style collective had begun to further fray at the ends and Be Bop gave way to such subtypes as "Cool," "Hard Bop," "Third Stream," and "Soul Jazz," all considered reactions to Be Bop's frenetic, nervous nature. However, on May 15, 1953, in Toronto's Massey hall, Be Bop in all of its brilliant invention was alive, well, and in charge. Sponsored by the New Jazz Society of Toronto, the program brought together perhaps THE five principal architects of Be Bop-Dizzy Gillespie, Charlie Parker, Bud Powell, Charles Mingus, and Max Roach.

The story surrounding these recordings is an improvisation worthy of the improvisers. According to Gene Santoro in his recently published biography of Charles Mingus, Myself When I Am Real (Oxford University Press, New York, 2000), the New Jazz Society of Toronto had originally tried to contact Bud Powell to headline a gala concert but were unable to locate him. This was because Powell was residing in New York's Bellevue Hospital on one of his numerous stays for mental illness. Powell had every bit the cult following Parker had and the Society was most interested in having him perform. The Society next tried to find Dizzy Gillespie with no luck and finally was able to contact Charles Mingus, who ultimately contacted Gillespie, Charlie Parker, Max Roach, and Powell's manager, Oscar Goodstein. The concert was set up.

On the day of the concert, things began to go wrong. It was discovered that the New Jazz Society of Toronto had provided only five airline tickets for travel to the show and the quintet had grown to a septet that included Mingus' wife Celia and Oscar Goodstein into whose authority Bud Powell was to be released from Bellevue. Gillespie and Parker decided to remain in New York to catch a later flight. When the two leaders arrived at Massey hall, they discovered a partially filled house that bolstered the fact that The Society had not sold enough tickets to pay the musicians after the show. Instead, the Society offered the musicians tapes The Society made of the concert.

Armed with only the tapes of the concert as capital, Charlie Parker approached Norman Granz, whose label, Verve, had Parker under contract and offer the tapes to him for $100,000.00. Granz declined. The Quintet, as they have come to be known, decided to release the concert on the recently formed Debut Records. Charles Mingus and Max Roach founded Debut Records as a means for jazz musicians (namely Mingus) to have more creative control over recording and distribution. The Toronto concert put Debut on the map and established a positive cash flow for the label.

The best that can be said for the actual recording of the concert is that it was a mess, both in sound and release policy. The show was recorded from the Massey Hall public address system, which was substandard, even by early '50s standards. This resulted in Mingus' bass being lost in the ground noise, particularly the very low notes. To compensate, Mingus overdubbed his bass parts for all of the quintet pieces and a couple of the trio pieces at Rudy Van Gelder's New Jersey studios. Charlie Parker was credited on the album sleeves as "Charlie Chan," a clever juxtaposition of Parker's name with his wife's name, to avoid contractual difficulties with Verve. Once assembled, the concert was released on three 10-inch LPs.

The release history of concert is as dry and complicated as an Old Testament lineage detail. So, cutting to the chase, the concert currently exists on two separate compact discs, one featuring the quintet and one featuring the trio of Powell, Mingus, and Roach, and ultimately others. The Quintet-Jazz at Massey Hall, Volume 1, finds The Quintet cruising through six Be Bop standards. These musicians, while very familiar with one another, most likely had never recorded as a quintet before, much less practiced together for this concert. The high musical quality of the show illustrates the greatness of Jazz and the Jazz Musician. A certain collective unconscious existed between these men enabling them to just stand and deliver this Art. Ellington's "Perdido," Denzil Best's "Wee," Gillespie's "Salt Peanuts" and "Night in Tunisia," Tad Dameron's "Hot House," and the ground-zero "All the Things You Are," could very well fill out a "best of" Be Bop list. The Massey Hall Quintet performances are that much more essential because they would be the last time Parker and Gillespie would perform together.

The Amazing Bud Powell- Jazz at Massey Hall, Volume 2 is a family quilt of performances, some from Massey Hall with Powell and his trio mates, some with Powell and other trio mates, not recorded at Massey Hall and some with Dr. Billy Taylor playing instead of Powell. Mingus had decided to make hay while the sun was shining and this disc is the result. Mingus culled multiple performances form other venues and with other performers to complete the trio sides of this concert.

In the inclusion of these additional recordings, Mingus was trying to cover his own bases and produce a product that would be popular and historic. That he did so in an "improvisatory" manner is today more a matter of a colorful history than the intentional deceit. The result is one of the more interesting pieces of Jazz lore.

Only a single member of this famous quintet remains alive today. Max Roach went on after this concert to form the influential Clifford Brown/Max Roach quintet that lasted until Brown's untimely death in 1956. He continued to record regularly throughout the next years. He continues to be a dignified fixture in the jazz community. Dizzy Gillespie passed away January 6, 1993 after a long battle with cancer. After Massey Hall, Gillespie accepted part of the ambassador of good will mantle from Louis Armstrong, and continued to record prolifically as perhaps Jazz's most visible practitioner. Ever the iconoclast, Charles Mingus went on to make jazz history with his Jazz Workshop and recordings like of Pithecanthropus Erectus and The Black Saint and the Sinner Lady. A charlatan, rube and visionary genius, Mingus continued to stir up the jazz world until his death of amyothrophic lateral sclerosis in 1979.

The remaining two quintet members ended badly. Years of abuse and excess extinguished the white-hot flame that was Charlie Parker. After the Massey Hall Concert, Parker continued to record and perform, attempted suicide twice (once after being fired from his namesake club, Birdland) and finally declined toward his death in the apartment of jazz patron Baroness Nica von Koenigswarter on March 12, 1955. He was 34 years old. Perhaps the saddest end of all was that of Bud Powell. Powell suffered from mental illness complicated by substance abuse most of his adult life. He endured hospitalizations and electroshock treatments before and after the Massey Hall Concert. Powell recorded frequently (often brilliantly) in the late '50s and early '60s before slipping off the radar and dying of tuberculosis, malnutrition and alcoholism in New York City on July 31, 1966.

Jazz at Massey Hall is a testament. The elder statesmen of Be Bop stood on the bandstand and gave the next generation of jazz musicians a lesson in performing Modern Jazz and from that performance came everything else we hear today. Like the older Romantics Coleridge and Byron giving way to the younger Keats and Shelley, "The Quintet" stood at the top of their form and issued their definitive statement that would forever change jazz.

Embraceable You, Sure Thing, Cherokee, Jubilee, Lullaby of Birdland, Bass- ically Speaking, Drum Conversation, I've Got You Under My Skin.

My Devotion, Polka Dots and Moonbeams, My Heart Stood Still, I Want to Be Happy.