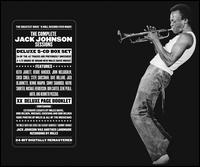 For many reasons, Jack Johnson never got the attention it deserved. For one, Columbia chose not to market the 1971 Miles Davis release as aggressively as its contemporary, Miles Davis at Fillmore East. And the LP was a soundtrack for an obscure boxing movie, which wasn't exactly a huge draw. And it disposed of much of the jazzier elements from Miles' first two fusion shots, Bitches Brew and In A Silent Way, boiling down to a power trio much of the time. The edgy funk/rock sound was a departure many listeners were unwilling to take.

But Jack Johnson has stood the test of time, much more in fact than some of Miles' other fusion records. What happened in Columbia Studio B on April 7, 1970 ended up on an LP side as "Right Off," after some jam improv and more than a little tightening up in the studio by producer Teo Macero. "Yesternow" came from the same day's work, plus ten minutes of "Willie Nelson" takes from a couple weeks earlier (and some extra material).

Now that Columbia has released the Jack Johnson sessions in their entirety, many doors have been opened. What musical ingredients went into the final mix? Check out the four takes of "Yesternow" from that April day. It's more than a jam, though Herbie Hancock pumps out a downright funky groove on the organ and John McLaughlin puts his foot into the wah right and left. It's more than musical history, though each of these players would go on to fame. (Nobody in the group at this time was over 30.) It's more than the sum of its parts, which is something Miles managed to pull off more often than not during his fusion years, despite not having much of a master plan except a soundtrack in his head.

So what exactly is there on this set? 5 discs, 42 tracks, 368 minutes; 19 musicians at 10 recording sessions over 16 weeks. To be honest, that's more than an earful in its entirety for all but the most devoted fans, but the beauty of the set is that depending on where you hit play, you'll hear a range of involving sounds.

Disc two: the early quintet with Steve Grossman, John McLaughlin, Dave Holland, and Jack DeJohnette. No keyboard here, and the dynamic between Holland and DeJohnette sounds as strong as anything their extended collaborations down the road would yield. Holland eagerly adopts the role of funky bass-man, mostly hanging around the root but regularly pushing up for more. "Go Ahead John" moves through incarnations in the form of spare blues, Sly soul, harder rocking funk, and, well, more funk. Who knew John McLaughlin had that much funk in him?

The multiple takes on these discs boil down to 16 separate titles, about half of which are contained on disc four, a personal favorite for its diversity of sounds. The two or three keyboards here (Jarrett, Corea, and/or Hancock) thicken the soup; the inclusion of percussionist Airto Morieria on two tracks enriches the timbre (check out his berimbau on the second version of "Ali," for example). A number of moody, atmospheric pieces provide some grounding for the outright blues/ funk jam of "Little High People," closing off with an only slightly-outdated "Little Church."

Those are a few highlights. Leave it to Bill Milkowski's liner notes to provide more information and perspective than any human could rightly expect from this material; producers Bob Belden and Michael Cuscuna do a beautiful job corralling this monolithic set into a friendly, open, accurate listening experience. The chronological arrangement of tunes, along with detailed track and personnel listings, helps make sense of it all.

In the end, of course, Jack Johnson was much more than a jam... but more than a few jams went into it. And that's really the whole point of this set.