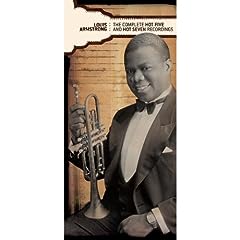 Perpetuating a Myth. It was recently determined that Louis Armstrong's birthday is August 4, 1901. Armstrong himself is on record as stating his birthday as July 4, 1900. That would make today the centenary of Armstrong's birth. It seems appropriate to accept this bit of improvisation on his birth, as Armstrong is a priceless American Treasure who is as much a part of the American fabric as Washington, Franklin, Roosevelt, and King. After all, he is the embodiment and Ambassador of America's indigenous music— Jazz. More appropriately, also, is that he was one of the first jazz musicians to improvise over a harmonic base...an improvisation like just making up one's birthday.

The Canon Ball. I have remarked that The Complete Recordings of Robert Johnson are as essential to world music as Bach's Well-Tempered Clavier. This can also be said Louis Armstrong's Hot Fives and Sevens, named as such because of the number of band members on hand for the recordings. In a view from 10,000 feet, these recordings, at the very least, document the genesis of improvised jazz and the ascendance of the trumpet (cornet) as a jazz centerpiece. At the very most, these recordings are an essential historic testament, redefining, like the Well-Tempered Clavier, a new, more orderly way of thinking musically. To labor with one more analogy, Music (with a capital "M") was never the same after the Hot Fives and Sevens, in the same way it was transformed by Beethoven's Third Symphony or Berlioz's Symphonie Fantastique. Louis Armstrong and this music are that important.

High Fidelity. I would not doubt that the Hot Fives and Sevens have never been out of print. I have personally owned them since their release as a part of the Columbia Jazz Classics LP series of the mid-1980s. I purchased the original compact disc releases and now possess these re-released gems, bearing the mark of the most advanced remastering methods available and just n time for Armstrong's birthday. A warning to the uninitiated, the fidelity of these recordings, improved as they might be, is poor when compared to contemporary standards. But, uninitiated or not, this lack of fidelity should not scare anyone off. Such a sonic challenge offers the listener the opportunity to transcend silly prejudice and hear this superb music through the veil of time, in all of its American Romantic Beauty. The Story. Between 1925 and 1928, Louis Armstrong entered the Okeh recording studios and carved some 60 acetate sides, using a quintet and septet respectively to comprise his 'Hot Fives' and 'Hot Sevens'. The personnel now reads like a who?s who at the the big bang of traditional jazz: Kid Ory, Johnny Dodds, Johnny St. Cyr, Earl Hines, Jimmy Noone. They all put this music on the map. In the present package, some 30 additional sides, most with the same personnel as the Fives and Sevens, are included. Also present in this package is the only known alternate of a Hot Fives recording, 'I Can't Give You Anything but Love.' This alone would be like finding another alternate take of Robert Johnson's 'Terreplane Blues'. The resources called upon to assemble this box involved the Smithsonian Collection, private collections, archives, and museums. Transfers were made from the originals to specially designed minidiscs employing a new plastic developed just to this project by the Scandinavian 78 RPM-specialist Harry Koster. The result, while not totally stunning, is an improvement over past sonics. More important is the assembly of all of these sides from so many sources and the scrupulous documentation provided.

Track Listing (Disc 2): Put'em Down Blues; Ory's Creole Trombone; The Last Time; Struttin' With Some Barbecue; Got No Blues; Once In Awhile; I'm Not Rough; Hotter Than That; Savoy Blues; He Likes It Slow; Gambler's Dream; Sunshine Baby; Adam And Eve Had The Blues; Put It Where I Can Get It; Wash Woman Blues; I've Stopped My Man; Georgia Bo Bo; Drop That Sack; Drop That Sack; Cornet Chop Suey. (Total Time: 61:27).

Track Listing (Disc 4): Fireworks; Skip The Gutter; A Monday Date; Don't Jive Me; West End Blues; Sugar Foot Strut; Two Deuces; Squeeze Me; Knee Drops; No (No, Papa, No); Basin Street Blues; No One Else But You; Beau Koo Jack; Save It, Pretty Mama; Muggles; Hear Me Talking To You; St. James Infirmary; Tight Like This. (Total Time: 73:53).

Louis Armstrong: Cornet, Trumpet and a host of others.