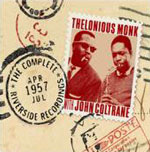 After last year's discovery and Blue Note release of a live recording featuring Thelonious Monk with John Coltrane, At Carnegie Hall, the Concord Music Group has released this two-CD set of Monk and Coltrane session recordings from earlier the same year. The collection includes false starts, alternate takes, previously unissued takes and final (reissued) copy. It's just like being there in the studio. The Complete 1957 Riverside Recordings comes with a detailed essay by the original producer about the team's work that year, along with a handful of interesting session photos.

These recordings, made in April, June and July of 1957 and presented chronologically on the album, demonstrate how evenly Monk and Coltrane worked together at that time. The sessions feature Monk's septet, trio and quartet. Art Blakey and Wilbur Ware drive the septet with authority; everybody takes spirited solos and jams. With the first stereo release of "Blues for Tomorrow, we get to enjoy the septet with superb sound reproduction. While Monk lays out on this one, it stands out as an incredible blowing session.

The alternate takes sound alike, and while it's fun to compare the tracks and explore every nuance, we get much the same from each one. Several, however, do vary greatly from one to the next, mainly through different solos. The longest tracks, where Monk and his septet members stretch out creatively, have the greatest impact. The album contains extended versions of "Well, You Needn't, "Epistrophy and "Blues for Tomorrow.

The final three tracks on the program feature Monk and Coltrane in a quartet session from July of 1957. Each of these three selections comes fully formed, without false starts or alternate takes.

These valuable Riverside sessions feature some of jazz's great legends at work, creating and drawing strength from one another. Monk's music makes each track memorable.