The Colossal Mess of "The Allman Brothers Band at Fillmore East" 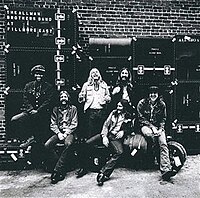 While the recent release of Eat a Peach, Deluxe Edition is a most welcome addition to the Allman Brothers Band discography, it incandescently illuminates the pornographically haphazard release history of this important material. The original two-LP release was largely culled from a series of four shows performed on March 12 and 13, 1971 at New York City's Fillmore East Auditorium. Since that time At Fillmore East has seen multiple releases on compact disc, each with differing levels of sonic cleansing and digital alchemy.

While a superior musical document in itself, At Fillmore East existed as a robust torso, not fully complete and, ultimately realized. Retrospectively, several songs recorded from the March 1971 Fillmore concerts not included on At Fillmore East are found strewn across Eat A Peach ("Trouble No More" and "Mountain Jam"), Duane Allman: An Anthology ("Don't Keep Me Wondering"), Duane Allman: An Anthology, Volume 2 ("Midnight Rider"), and The Allman Brothers Band: Dreams ("Drunken-Hearted Boy"). "One Way Out" which appeared first on Eat a Peach was the only song not actually recorded March 1971. It was recorded on June 27, 1971 at the final Fillmore concert before the hall closed. "One Way Out" had been performed during the March shows, but producer Tom Dowd felt that the June performance was definitive. Prior to the release of The Fillmore Concerts in 1992, this discography accounted for all of the music in release from the famous March 1971 shows.

The Fillmore Concerts (1992) contained the first unreleased material from the Allman's famous stand at the Fillmore. Perhaps the greatest difference between At Fillmore East and The Fillmore Concerts outside of the additional material added is the digital editing on "In Memory of Elizabeth Reed" and "You Don't Love Me," combining the superior pieces of the multiple takes of each performed during the four shows. Needless to say, this was controversial. This bit of Tom Dowd wizardry also magnifies an additional issue to be considered: the amount of material drawn upon for the extant releases.

History documents that two shows each were performed on not only Friday, March 12th and Saturday, March 13th, the dates from which the bulk of the material was drawn but also Thursday, March 11th. If we consider the 13 songs making up At Fillmore East Deluxe Edition (the most complete document yet released) as an typical performance during this period, then there exists ostensibly 52 tracks of performances for March 12th and 13th, and 78 tracks if the March 11th shows are included. Tom Dowd would have undoubtedly recorded all of this material for the live album release, not to mention the entire show performed on June 27, 1971 that captured the released "One Way Out from the closing of the Fillmore East. This suggests a huge amount of unreleased material from a historically important period in American musical history.

The release of Eat a Peach, Deluxe Edition indeed provides some of this unreleased material. However, all of this newly released material is oddly derived from the June 27, 1971 closing show, making the entire At The Fillmore picture frustrating. In light of the 2005 release of Joe Cocker Mad Dogs and Englishmen The Complete Fillmore East Concerts documenting all of Joe Cocker's four Fillmore East shows from Friday, March 27th and Saturday, March 28th, 1970, an equally valuable and important series of concerts, one must believe the Allman Brother's handlers at Universal Music Group could provide the public a similar, all-inclusive product.

Certainly by 1970s standards this material should have been edited and only the best material (as deemed at the time) released. For example, the Allman Brothers Band Website, in that site's Set List section notes that on Thursday, March 11, the Allman Brothers used a horn section in the show. Legend has it that Tom Dowd played the tapes back for the band and they were so bad that Dowd and the band felt none of the material should be released. This anecdotal story is supported in Randy Poe's recently published Skydog: The Duane Allman Story (Backbeat Books, 2006) while being completely ignored (as was the entire Thursday, March 11, 1971 show) in Scott Freeman's Midnight Riders: The Story of the Allman Brothers Band (Little, Brown & Co., 1995). AT the very least a mixed picture emerges as to which material was archived and which was not. It would be historically interesting at the very least to hear these tapes.

However, these performances are historical documents. At Fillmore East is considered by this and other writers as one of the greatest, if not the greatest Rock Live recording ever made. In listening to the previously unreleased material included on Eat a Peach, Deluxe Edition, it becomes abundantly clear that all of this music is worthy of hearing and documenting, regardless of previous production prejudice. Universal, do the right thing and release all of the available tapes of these shows.

Writer's Note: Should any of the readership find any of this content inaccurate, please let me know. Additionally, if there are documented set lists available (aside from those from bootleg lists) from the March 11-13, 1971 and June 27, 1971 shows, I would be grateful to receive and incorporate that information here.