The Columbus Jazz Orchestra: The Colors Of Jazz 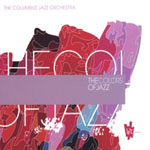 With big bands back in fashion, there's no shortage of large ensemble jazz to be heard, even in the jazz hinterland of Ohio. With The Colors Of Jazz, the Columbus Jazz Orchestra gives the Buckeye State its due, drawing from a palette of traditional big band favorites, tastefully selected hard bop tunes and original compositions.

Led by versatile trumpeter and conductor Byron Stripling, the CJO swings confidently in the brassy tradition of Basie or Armstrong rather than the modern styles of Charles Tolliver or The Mingus Big Band. The disc even opens with Stripling taking an Armstrong-style vocal turn on the eternal "Sweet Georgia Brown. But while Stripling's compulsion to entertain in Pops fashion is understandable in a pop symphony setting, like Armstrong he impresses the most when he is blowing out a buttery high note or an exquisitely formed melodic line. His sterling rendition of "Do You Know What It Means To Miss New Orleans is remarkable, giving one a chance to appreciate his unwavering control and golden tone.

Some of the most rewarding tracks on The Colors Of Jazz are the ones where the CJO strives to add new colors to modern jazz compositions. I really enjoyed the tension and release in the arrangement of Wayne Shorter's "Infant Eyes, a song highlighted by a carefully modulated tenor sax performance from Chad Eby. Eby also shows a lot of daring with his intricate soprano sax work on "I Found a New Baby. Horace Silver's "The Preacher is given a far too polite treatment, but the inclusion of a Hammond B-3 organ keeps the arrangement grounded in the gospel. A definite low point in the program, though, is the schmaltzy version of "Something To Live For, featuring a wince-inducing American Idol-style vocal.

Byron Stripling is a generous leader and he shines the spotlight on several fine soloists during the excellent three-part centerpiece of the recording, "The Color Of Jazz Suite. On the mysterious "Primary, the staccato three-note harmony of the piano opens up broad melodic possibilities for Michael Cox's lyrical soprano sax. "Byron Blue is Stripling at his most Ellington as he vacillates from mutes to open tones. The suite culminates with "Sax-hue-phone, featuring a twin tenor sax workout between Michael Cox and Pete Mills and followed by a punchy finish from the brass section.

At the conclusion of "The Colors of Jazz Suite you might wonder why so much time was devoted to nostalgia on the disc and so little was devoted to developing the suite itself. The suite is way too brief for the evolution-of-the-big-band theme that it is trying to convey and that's really the central flaw of The Colors Of Jazz. It's certainly a solid listen for big band lovers and mainstream jazz fans. But while it dabbles in the many hues of jazz, it would have been more satisfying if Stripling didn't spread the colors so thin.

Track Listing: Sweet Georgia Brown; 'S Wonderful; I Found A New Baby; Amazing Grace; Infant Eyes; Something To Live For; Topsy; The Preacher; Do You Know What It Means To Miss New Orleans?; Shell Game; The Color Of Jazz: Primary, Byron Blue, Sax-hue-phone.

About The Columbus Jazz Orchestra