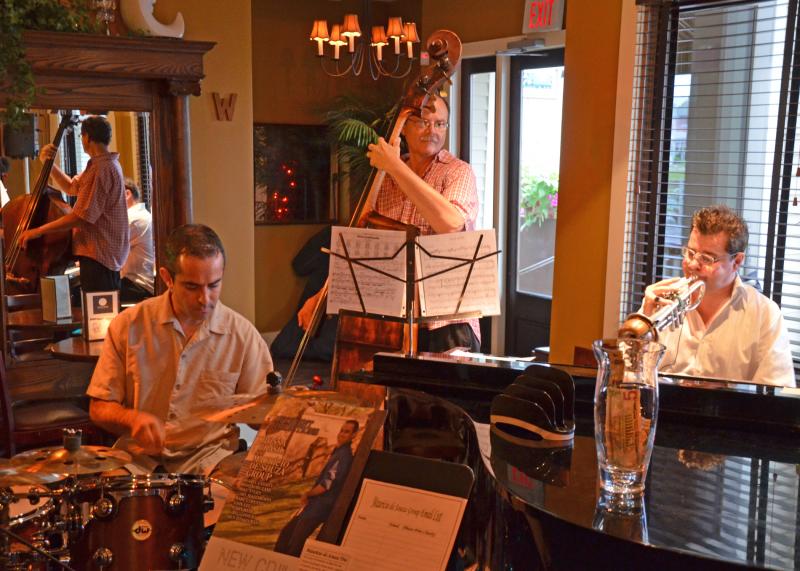 By GLORIA KROLAK
October 10, 2014
Sign in to view read count
Moonstruck Restaurant & Cocktail Lounge owners Luke Magliaro and Howard Raczkiewicz hired a trio not long ago for a Friday night gig at their popular bistro in Asbury Park, and they got a quartet. Drummer Mauricio de Souza and bassist Gary Mazzaroppi teamed up with pianist-trumpeter Alan Chaubert. Close your eyes and you hear a quartet.

That's because Chaubert plays both instruments at the same time. The technique may require a split personality, but the result is Chaubert's smoky muted trumpet accompanied by his left-hand piano layers. At times he also plays, as you might expect, each instrument alone.

Gary Mazzaroppi is as fine a bassist as you'll ever hear. His instrument has a deep chocolate tone, the range where he tends to dwell. In a trio there is plenty of time for bass solos, and we were treated to some of the best from Mazzaroppi. His first big gig, Gary told me later, was with Lionel Hampton. Chuck Mangione has also claimed him as a sideman.

De Souza was born in Brasilia, the capital of Brazil, and came to the U.S. when he was 18 to study with the venerated Joe Morello in New Jersey. While he chose to stay, he's not quite become a Jersey boy, retaining a soft and ready smile, easy demeanor and the air of someone still adjusting to his surroundings. At the drums, however, he needs no adjustment. De Souza is a creative and confident drummer who, during two extended solos, spontaneously combusted into the language of his birth, the samba rhythms for which Brazil is famous.

De Souza has recorded albums with his two bands, the Mauricio De Souza Group and Bossa Brasil. His first, Here. There... from 2010 straddling his two worlds, and the second, Different Directions in 2014, with an equally eclectic playlist of Brazilian composers Jobim, Lobo and Rosauro to bebopper Dizzy Gillespie and fusion specialist Chick Corea. One set at Moonstruck included Miles Davis-Bill Evans' "All Blues," Jobim's "Useless Landscape," Benny Golson's "Whisper Not" and Kern-Harbach's "Smoke Gets In Your Eyes," all rendered with sophistication.

The band played straight through without announcements, which Raczkiewicz feels might interfere with diners. But this minority of one missed knowing what was being played when it came to unfamiliar tunes like Pat Metheny's "Bright Size Life," from the guitarist's 1976 debut album. The night was a bull's eye for the venue, a trio with a strong presence, entertaining folks in the lounge who would soon take their seats upstairs, only to be replaced by others. For those in the lounge for the music, however, some remarks from the bandleader would have been welcome.

Moonstruck sits alongside Wesley Lake; lit up, the building is as impressive as a paddlewheel boat steaming up the river, and just as festive. With two large and inviting dining rooms on the second and third floors—each has its own veranda facing the lake for additional dining—the restaurant seats 255. The first floor is the busy bar/lounge where the band sets up. It boasts a grand piano, lighting and speakers in a perfect setting of dark woods, café au lait walls, and a spray of peach gladiolas behind the bar.

Raczkiewicz handles the back end with 16 kitchen staff. Magliaro serves the front of the house, greeting diners and assigning tables. After 13 years in this location and 25 in the restaurant business, the partners have fine-tuned their management style. Even with a steady stream of hungry diners, their staff manages to hustle and look relaxed at the same time—a hard mix to achieve in such a busy place.

We had dinner upstairs first, regrettably missing the first hour of the trio's performance, which started at 6:00 PM. We were seated immediately, though, choosing the veranda on this balmy August night, a blessing for outdoor dining. Michael, my other half and photographer, thoroughly enjoyed a beet and goat cheese salad. I ordered the New Jersey tomato salad special recommended by our waitress. It was deliciously prepared with chickpeas, red onions and a vinaigrette dressing. But the home-grown tomatoes stole that show.

We both selected pasta with chicken and were more than satisfied. Michael's was whole wheat penne with wild mushrooms, mine fettucine with a pesto cream sauce. I carried my glass of Malbec to the lounge, where Michael ordered a second drink. Our total for the night came to a very fair $100. The menu is more diverse than it would seem from this description, and you can view it at Moonstruck's website. Reservations are taken for parties of 12 and larger, and there is paid parking along the lake.