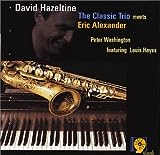 One of the pleasures of keeping up with the ever-growing number of recordings featuring David Hazeltine is savoring his connection to a select circle of peers. The pianist thrives in the company of strong, assertive individuals who stretch the bebop-rooted, straight-ahead tradition without breaking the mold. Three of Hazeltine's most important alliances are with drummer Louis Hayes, bassist Peter Washington, and tenor saxophonist Eric Alexander. As a sideman for several years in Hayes' working quintet, he developed an extraordinary rapport with the dean of hard bop drummers. The evidence of their hookup is on recordings under Hayes' name for Sharp Nine and TCB. Hazeltine, Washington, and Alexander are longstanding members of the band One For All. The pianist and bassist guide some of the still-young tenor man's strongest, most fertile playing during the cooperative sextet's discs on Sharp Nine, Criss Cross, and Venus.

The brainchild of Hazeltine and producer Marc Edelman,The Classic Trio Meets Eric Alexanderis a brilliant addition to the pianist's pair of excellent "Classic Trio" sessions with Hayes and Washington. His brisk "On The Boulevard" gets things off to a flying start. Alexander plays chorus after incisive chorus, never running out of ideas or energy, while the others keep coming at him from different angles. Washington's walking is both firm and springy, Hayes' poking and prodding constantly stirs things up, and Hazeltine's chords always seem to complete the saxophonist's thoughts while suggesting new directions and adding another layer of jagged rhythms. The dust temporarily settles at the beginning of the pianist's solo, a model of concise, melodious bebop, before things start to build as Hayes pierces Hazeltine's every phrase without being obnoxious.

Displaying his customary affinity for modern popular songs, Hazeltine's treatment of Jimmy Webb's "Didn't We" deftly balances the tune's sentimentality and the band's improvisational predisposition. As Washington and Hayes provide restrained support and the pianist flashes brief, telling asides, Alexander plays the melody in a heartfelt manner. Just before he finishes, the metallic ping of Hayes' ride cymbal sounds off and then the tempo increases to a steady, unhurried gait. Attuned to the pulse and Hayes' persistent comments, Hazeltine starts slowly, leaving open space as he thoughtfully shapes a continuous flow of details with the whole in mind, and before long the solo is surging forward.

Early on during Alexander's statement of a startlingly fast "East Of The Sun," there's a brief opening and the drummer pounces with three whacks to a mounted tom-tom. It's Hayes' way of putting us on notice that he'll be running the show for the duration of the track. While his distinctive ride cymbal cuts through the quartet, he relentlessly prods Alexander by utilizing stark, jolting combinations in which a stroke or two on the snare is quickly answered by the bass drum. During Hazeltine's animated turn, Hayes' snap and boom sequences yield to Morse code-like snare drum cadences that seem to encircle the pianist's every movement.

On the Boulevard, O Grande Amor, Jessica's Night, Hayes' Phase, Knocks Me Off My Feet, East of the Sun, Didn't We, Our Delight