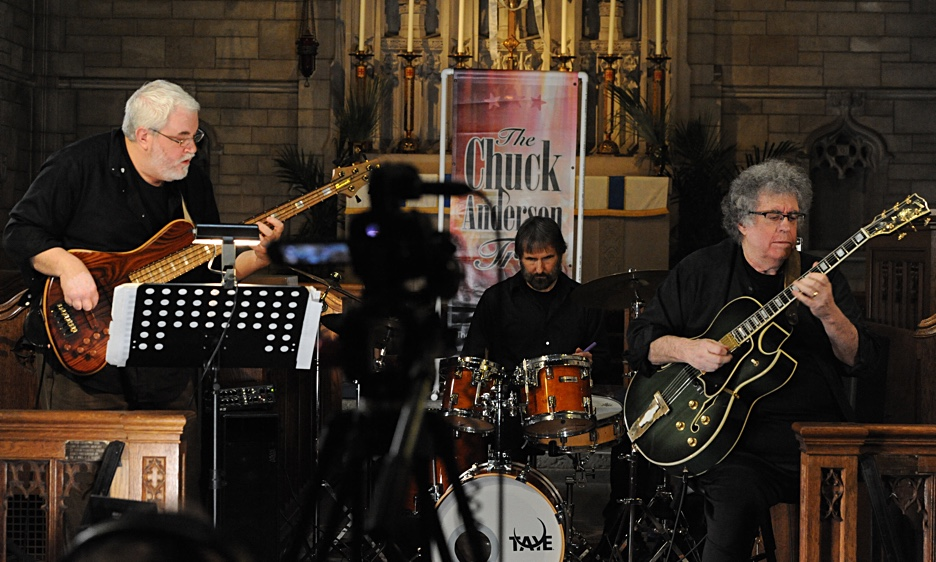 In his first concert in more than a year, Chuck Anderson returned to the stage at St. George's in Ardmore, PA. After a long illness, Anderson's heavily publicized "Recovery Concert" filled the venue with fans of live jazz guitar of all ages. Accompanied by Ed Rick and Eric Schreiber, the modern incarnation of the original Chuck Anderson Trio, Anderson's audience friendly, yet virtuosic, playing was on full display again.

Upon being welcomed back to the stage by a supportive crowd in the striking atmosphere of the nearly century old St. George's Episcopal Church, Anderson returned to the form last heard in 2018. The trio performed an extended 90 minute set consisting of originals, standards, and jazz classics.

The opener was Bobby Timmons' classic tune "Moanin,'" a blues-based, minor key gospel tune, and staple of the Chuck Anderson Trio's live repertoire. It was followed by "Spring Rain" an evocative original dating back to 1974's Mirror within a Mirror. The ethereal modality and open explorations of the tune, especially of the interlude, makes it accessible to jazz aficionados and jam-band lovers alike. "Yvette," another original and gentle jazz waltz, modulated the energy in the room, and showed the band's ability to play in a relaxed, sentimental style.

As the theme of the concert was recovery, Anderson debuted a newly composed piece, "The Recovery Blues." It is a 12 bar blues, characterized by a typical bebop rhythm—sixteenth note triplets, in thirds and sixths to fill out the texture. Next was the up-tempo "House of Samba," another Anderson original, in a minor key characterized by an overt Latin rhythm and propulsive cut-time feel.

The trio again returned to the standards in performing an atypically upbeat, yet very appealing, rendition of Jerome Kern's "Yesterdays." The second half of the extended set drew upon the jazz standard repertoire almost exclusively. This included classic swing tunes in "There Will Never Be Another You," "I'll Remember April," and "On Green Dolphin Street." A particular highlight was the trio's performance of Wes Montgomery's jazz waltz "Full House." Two other Latin tunes made their way into the performance —"Theme from Black Orpheus" and "Mas Que Nada" were both performed with an energy and movement that the trio demonstrates to great effect on Latin genres of all varieties.

Any Chuck Anderson Trio concert is incomplete without a spontaneously composed/solely improvisational guitar solo and the Trio's traditional closer (and virtuosic display) "Milestones."

The atmosphere and energy of the performers, as well as the enthusiastic audience, undermined the idea of a "recovery" concert, and, in fact, were more indicative of a successful and full return to performance for Chuck Anderson and his Trio. The concert was filmed and will be distributed in its entirety on Anderson's Youtube channel.