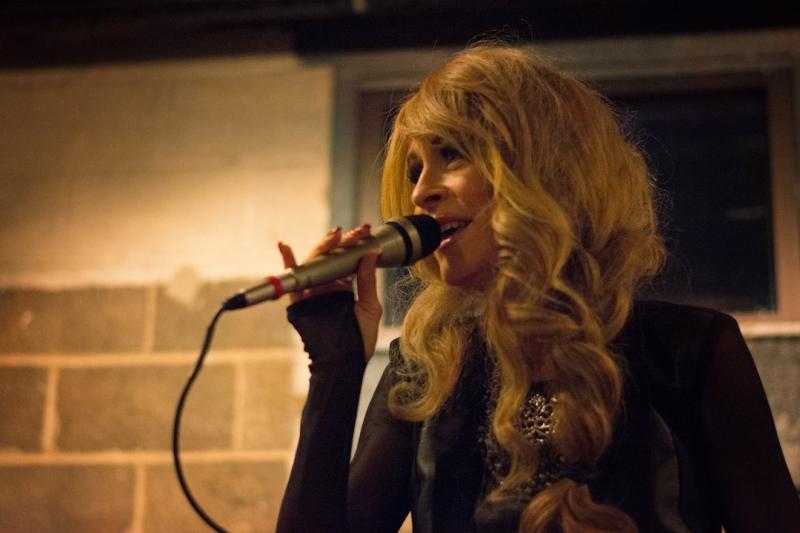 At the 13th annual Media Jazz Festival, the Chuck Anderson Trio made their fourth appearance since 2007, but this time with a new component to the show: the trio was joined by featured jazz vocalist Coreen.   The Trio of Chuck Anderson, drummer Ed Rick and bassist Eric Schreiber played familiar and original tunes, with standards that are especially well suited to Coreen's vocal stylings.

The set opened with Art Blakey's classic "Moanin,'" which has become a standard for the Chuck Anderson trio. The familiar hard-bop tune was enriched by Anderson's solos, marked by Wes Montgomery-inspired octaves, gliding double stop passages, and chord solos, all interspersed with a heavy dose of the blues.   Next came the Anderson original "Spring Rain" from the CD The Vintage Tracks. The Latin-feel theme had shades of both Dorian and Lydian modality. At times, the poly rhythmic performance bordered on the edge of the psychedelic or jam band repertoire, while remaining very much within the realm of straight ahead jazz. This was a vehicle for Anderson's most adventurous solo of the set, with mutes, bends, vibrato, harmonics and simultaneous improvisation showing the depths of his creative resources.   Coreen, took the lead for the next two tunes, Gershwin's "Summertime" and the bluesy standard "Cry Me a River." These showed off the higher end of her remarkable vocal range and her talent for establishing an instant rapport with the audience.

The Trio played two more instrumentals, "There Will Never Be Another You" and "All Blues," before Coreen's return. "All Blues" was especially notable for Ed Rick's rhythmic interplays and a great bass solo from Schreiber.   Coreen followed her first two tunes with the standard "Nature Boy," which was first played accompanied only by the guitar before the band came in with a light bossa for the second iteration. The swing tune "I Can't Give You Anything But Love" and the ballad "God Bless the Child" rounded out the vocal set, showcasing her full range, strong blues sensibility, and the unique sound her interpretations produce. In fact, these features will soon be showcased for the public, as her first jazz vocal album is currently in production. The set ended with a medley of Anderson's original "Matchsticks" into the high energy classic "Milestones."