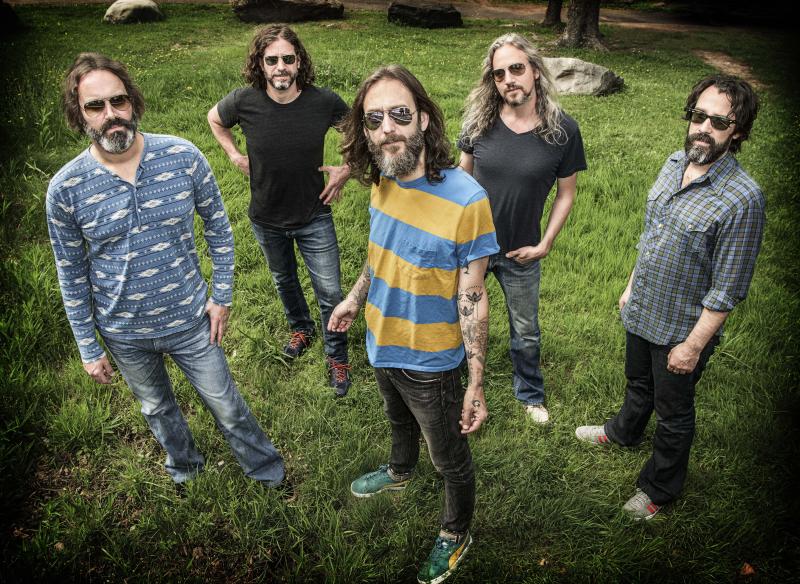 Sunday November 5th was the first night following the end of daylight savings time, which might have held some portent for the Chris Robinson Brotherhood, a group whose leader places so much stock in the mystical. But the group's return to the Green Mountains was more significant as the band's first appearance in Vermont since the release of their latest studio album Barefoot in the Head (Silver Arrow, 2017).

It also marked an event noteworthy in itself because it comes after the completion of a prolonged reconfiguration process for the group. Personnel changes within CRB began a couple years ago, but as became obvious early on in this show, drummer Tony Leone and bassist Jeff Hill are firmly established as a rhythm section. The stability the two offer lends fluidity to the interactions of the whole quintet, particularly in extended uninterrupted segments, the likes of which occurred in each of the two ninety-minute sets this particular evening, once the band became fully warmed up.

No truly spectacular improvisation materialized during those segments when the Brotherhood string together multiple segues of songs, beginning at the earliest juncture around "Roll Old Jeremiah," but these are nevertheless those moments the group legitimately deserves spontaneous acclamation from the crowd. And not just for guitarist Neal Casal's most heated solos, although those are certainly deserved: these instances constitute the CRB's most direct connection with the audience, even as the quintet also communicates via its choice of songs, both original and covers.

As if a statement of pride in their performance, the Brotherhood played the Flying Burrito Brothers' "Older Guys" to conclude this it's 2014 performance at the Rusty Nail in Stowe and the group opened this show with another cull from the country-rock pioneers. And "Lazy Days, " off Burrito Deluxe (A&M, 1970), was a telling choice: the initial set found them exploring the terrain mapped out by the Grateful Dead with American Beauty (Warner Brothers, 1970). But if the ensemble moved oh-so-sinuously through their jams here after chugging into gear, it rocked harder, in decidedly more raucous fashion, after opening their second turn on stage with the title song of the The Rolling Stones' Let It Bleed (London, 1969).

ADVERTISEMENT
Yet even with keyboardist Adam MacDougall (thankfully) continuing to concentrate on piano—and, to a slightly lesser extent clavinet, leaving synthesizers to mimic pedal steel notes—the ambient sound was somewhat startling as it arose from a rendition of Bob Dylan's "Tough Mama" off his sole studio record with The Band, Planet Waves (Asylum, 1974). Again indicative of the care by which Chris Robinson and company choose songs on any given night, certain lines of the Nobel Laureate's rang loud and clear for the co-founder of the now-defunct Black Crowes as he sang them this night: "I ain't haulin' any of your lambs to the marketplace any more!"

At this point in 2017, there's a definite element of surprise about the Chris Robinson Brotherhood, a delightful element definitely more apparent this sabbath than during the visit to the Rusty Nail in Stowe last year, when the group so often sounded so tentative. And if the noise the five men conjured up coming out of the Dylan tune was most appropriate to the lights flashing on the 'freak' flag hung as a backdrop to the stage, so was this bandleader's increasingly animated presence as the evening came to a close: by the time the "Sunday Sound" referenced at mid-point of the night came to a feverish climax, the CRB may not have achieved the transcendence they aimed for, but they deserved every one of the spontaneous accolades that arose from the audience during the course of their three hours on stage..

That's because the Chris Robinson Brotherhood are elevating earthy bar-band musicianship to a high art. And if that means more than a few in the audience imbibed to a fault to inhabit some kind of rarefied air themselves—even as the floor remained full of fans bobbing, weaving and bouncing, the population at the back bar area diminished noticeably as the night progressed—that didn't render much less genuine the valiant aspirations of this hirsute group of road warriors as they commanded the Higher Ground Ballroom.