By DAN BILAWSKY
October 8, 2013
Sign in to view read count 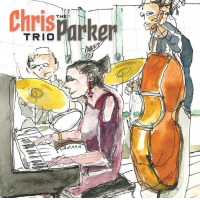 Drummer Chris Parker has a to-die-for résumé. Over the past four decades, he's worked with everybody from the Brecker Brothers to Miles Davis and Laura Nyro to Lou Rawls, taking a genre-blind approach to drumming that continues to serve him well. As a sideman, he's made his mark time and again with a who's who of music giants, but he also knows a thing or two about leading a band.

Parker's trio, with bassist Ameen Saleem and pianist Kyoko Oyobe, is one of the most dynamically tuned-in threesomes to put out a record in 2013. While it's true that this is a piano trio, the piano doesn't own the music; this is an evenhanded outing where Saleem's bass plays second fiddle to no one and Parker's drums do plenty of talking.

The music presented herein is all about feel, balance and creative expression. Parker takes a balanced approach to programming, mixing originals and covers in near-equal proportions. One minute, the trio might be tackling a metrically evolving "Love For Sale" and the next minute they might be taking a reflective stance with "Wednesday Morning." Oyobe contributes two originals—"Waltz For Apple" and "We'll Meet Again-Matane"— and Parker puts a few of his own out there, like the Schubert-meets-soca "Impromptoph" and the finely flowing "C'est Possible." Other gems include a reggaeton-inspired rewrite of guitarist Pat Metheny's "Song For Bilbao," a funky-as-hell take on Horace Silver's "I Want You," and an album-ending trip through Ray Charles' "Rockhouse."

Parker's made a career out of playing the right thing for the right situation and that skill carries over into his own work; he never misses a beat here.

C'est Possible; Love For Sale; Wednesday Morning; Song For Bilbao; Waltz For Apple; We'll Meet Again-Matane; In A Capricornian Way; I Want You; Six Beauties On A Rooftoph; Impromtoph; Rockhouse.