By CHRIS MOSEY
December 9, 2017
Sign in to view read count 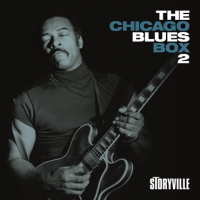 It's a strange but true story: how a French woman schoolteacher, reared on classical music and Gallic chansons, came to play a major role in reviving the fortunes of Chicago blues in the 1970s.

Marcelle Chailleux was introduced to the blues by Jacques Morgantini, a founder member of the Hot Club de France.

Jacques played her his 78 rpm record of Muddy Waters singing "Honey Bee" and Marcelle was hooked—"I didn't know it was possible to get so much emotion from music," she said. Then, to thank Jacques properly for his trouble, she married him.

In 1975, worried that blues in the Windy City wasn't being properly documented, Marcelle set up a record company, MCM—the initials of her married name—then flew to Chicago, where she recorded such lynchpins of the idiom as Eddie Taylor, Big Voice Odom, Jimmy Johnson, John Littlejohn, Magic Slim, The Aces, and Jimmy "Fast Fingers" Dawkins in legendary clubs such as Big Duke's, Ma Bea's and The Golden Slipper.

Marcelle would arrive with her trusty Nagra IV S tape recorder early in the evening before things got too rambunctious.

After her death at the age of 82 in 2007, the rights to Marcelle's marvellously atmospheric recordings were bought by the Danish label Storyville.

The Chicago Blues Box 2 is the latest reissue of Marcelle's work: a mind-blowing set of eight CDs along with a richly illustrated booklet of reminiscences by Jacques Morgantini.

CD1 features a set by Eddie "Playboy" Taylor, who wedded the Mississippi Delta tradition of guitar with the shuffle style of the Windy City. They say he taught Jimmy Reed how to play.

On CD2 that solid, no frills bluesman Hip Lankchan breezes effortlessly through a program of covers, followed by Eddie Clearwater, with four numbers that include —puzzlingly —a track listed as "Poison Ivy," which turns out to have nothing whatsoever to do with the old Coasters' crossover hit.

While we're being picky, how come two pages of ugly, garbled filler text got left in the booklet? Scarcely the best value for money for hard-pressed blues fans —couldn't someone have found appropriate photos to fill the space?

But let's return to "Fast Fingers" Dawkins. He became a firm friend of the Morgantinis, visiting them at their home in Pau, France, where he sampled Marcelle's cooking and, satiated, wrote the instrumental boogie "Marcelle Morgantini's Cassoulet" in tribute.

Marcelle discovered Jimmy Johnson playing back-up guitar for Dawkins and recorded him in his own right for the first time. On CD4 he pays a moving tribute to his mentor during a live show, calling on her to take a bow.

CD5 is given over to John Littlejohn, real name John Funchess, from Gary, Indiana. He was a friend of Joe Jackson, patriarch of the Jackson family, which is how his band came to be used in rehearsals by the Jackson Five in the 1960s.

CD7 is a rollicking rhythm and blues gem, starring The Aces: Louis Myers (guitar), his brother, Dave Myers (bass) and the irrepressible Freddie Below—another great friend of Marcelle and Jacques—on drums. It features some sterling work by Bobby King on guitar.

To be picky again, "Kansas City" is listed as having been written by the interestingly named Little Willie Littlefield when in fact it was penned by white hepcats Jerry Leiber and Mike Stoller. The song was first recorded by Littlefield.

The last CD in this extraordinary collection is by Willie Kent, a talented singer and guitarist who only became a professional musician when he passed 50 and open-heart surgery curtailed his day job as a truck driver. Music had always been Kent's main interest in life. As a boy he would follow Elmore James from gig to gig absorbing his style. Marcelle's recording of him includes a fine, reverent version of the James' classic "Dust My Broom."

And that's it: a marvellous collection, and a fitting memorial to the remarkable Marcelle Morgantini.

CD1: Opening – Fred Below and Eddie Taylor; Red Light; Big Town Playboy; Blow Wind Blow; Down In Virginia; Lucky Lou; Tell Me Mama; Talk To Your Daughter; Hide Away; Be My Little Girl; Red Light; Mojo Hand; Got My Mojo Working; Dry Land No. 2; Where Are You Gone; The Thrill Is Gone. CD2: You Left Me With A Broken Heart; I’m On My Way; Last Night; All Your Love; I Don’t Want No Woman; Black Nights; Sombody Loan Me A Dime; Same Old Blues; Why I Sing The Blues; Everyday I Have The Blues; You Don’t Have To Go; Poison Ivy (sic); My Babe. CD3: Way She Walks; Rock Me Baby; I Wonder Why; Cold Sweet Blues; Driving Wheel; Will My Baby Be Home Tonight; Big Duke’s; Hard Road To Travel; J.D’s Jam; Nature Ball; Pretty Woman; Ode To Billie Joe (sic). CD4: Long About Midnight; Strange Thing Happening; Look On Yonder Wall; I’m Crazy About You Baby; Breaking Up Somebody’s Home; Sweet Little Angel; Three Times Chicago; Midnight Hour; My Own Fault; Get Ready Here I Come; Same Old Blues; So Many Roads No.2; As The Years Go Passing By. CD5: Dust My Broom; Rob And Steal; Five Long Years; Kiddeo; That’s All Right; I Can’t Stay Here; Bobby’s Rock; Twenty Nine Ways; So Glad You’re Mine; All I Want; Dream No.2; All Your Love; Sunny Road. CD6: Buddy Buddy Friend; You Upset Me Baby; Born Down The Bridge; Rock Me Baby; Tell Me Baby; Jumpin’ At Ma Bea’s; I Don’t Got Over; Tramp; Josephine’s; As The Years Go Passing By; Everything Gonna Be Alright; Mary Lou. CD7: Rock Me Baby; You’re The One; Baby What You Want Me To Do; Someday Baby; Off The Wall; Bobby’s Rock; Kansas City; Honky Tonk; Don’t Throw Your Love On Me; C.C. Rider; Sweet Home Chicago; Hide Away; Tribute To Little Walter; The Aces’ Shuffle; Blues With A Feeling; Honky Tonk No.2. CD8: I’m Not The Same Person; Ghetto; Dust My Broom; I Wonder Why; You Don’t Love Me; Chili Con Carne; Blue Guitar; Bobby’s Rock; Sweet Home Chicago; Tell Him He Got To Go; Chicken Shack; 19 Years Old No.2; I Love The Woman; You Know I Love You.