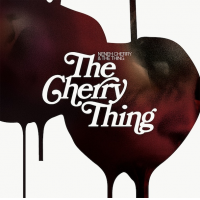 The Scandinavian power trio of saxophonist Mats Gustafsson, bassist Ingebrigt Håker Flaten and drummer Paal Nilssen-Love named their band The Thing in 2000, after the Don Cherry composition from Where's Brooklyn (Blue Note, 1966). In their subsequent dozen or so albums, they have covered Cherry's music and that of Albert Ayler, Joe McPhee, and Duke Ellington. The Thing has also ventured outside the jazz idiom to perform music by The White Stripes, Yeah Yeah Yeah, PJ Harvey, and Cato Salsa Experience. Think Sahib Shihab meets Black Flag.

Theirs is not crossover music as much as it is street-barricading sounds.

On The Cherry Thing the trio backs vocalist Neneh Cherry—stepdaughter of Don Cherry, and a pop, punk, hip hop and world music star in her own right.

The players aim for no prisoners here, applying a post-punk sensibility to a range of sounds. The band covers "Accordion" by hip hop artist MF Doom, which becomes a sort of Gil Scott-Heron rap mined for the message, while Gustafsson's baritone flares. Same for "Too Tough To Die," a muscular urbanized anthem. Cherry parses out her step father's music with the spirituality of "Golden Heart" and on her own "Cashback." The back trio supports her throughout, yet never neglects its own sound. "Sudden Moment" begins as a slow loping blues, Gustafsson harmonizing with Cherry; the saxophonist then takes on his Albert Ayler persona, blasting forth as Nilssen-Love's drum kit thunders over Flaten's pulse. Their burning core is barely contained.

That intensity carries over to the band's cover of The Stooges' "Dirt." Gustafsson's saxophone flutters before the impenetrable heaviness of the music descends. Cherry's vocals become a pastiche of Iggy Pop and undiluted sex, urging the band to burn the stage down. The highlight single, however, is Cherry's cover of Suicide's "Dream Baby Dream," a persistent and reiterated mantra of hope, sound and conviction.