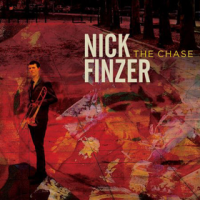 Trombonist Nick Finzer distinguishes himself as horn player, composer, and bandleader on this exciting sextet date. It's upbeat modern jazz just about all the way, aided by creative arranging. This is bop-based music, but Finzer avoids the trap of having all of the tunes follow the same head-solos-head format. There's plenty of solo space, but not everyone solos on every piece, or in the same order. This is a group of players who know each other very well, which can be clearly heard in the recording.

"I wanted this album to focus on the personalities of the band," Finzer says, and the tunes do give everyone in the group a chance to shine. "Life Happens" opens the album with a bang, and features solos from Finzer, saxophonist Lucas Pino, and guitarist Alex Wintz. Pianist Glenn Zaleski gets his chance on the following track "Spheres of Influence," which also showcases the empathy between Finzer and Pino. Towards the end of the tune they engage in a lively dialog, first in call and response, then improvising simultaneously.

There's variety in the writing as well. The title tune opens with rapid lines suggesting a chase, then settles down into a vaguely Middle Eastern groove reminiscent of Duke Ellington's "Caravan." "Steadfast" opens with what could be pattern music, while the closer "Just Passed the Horizon" boasts an extended introduction. Finzer pulls out a mute to give his melancholy ballad "While You're Gone" an old school sound.

Obviously this is a great trombone showcase, so fans of the instrument should not hesitate to grab a copy. But it's far from a niche effort: it's just energetic, swinging modern jazz.