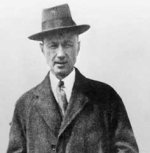 American poet Wallace Stevens (1879-1955) did not pay the bills writing poetry. Stevens attended Yale and then the New York Law School before joining the American Bonding Company as staff council. From ABC, Stevens went on to become the vice-president of the New York Office of the Equitable Surety Company of St. Louis, Missouri.

When Stevens' job was phased out as a result of mergers in 1916, he joined the home office of Hartford Accident and Indemnity Company where he worked the remainder of his life. In his spare time, Stevens composed such works as "Anecdote of the Jar," "The Emperor of Ice Cream," "Sunday Morning ," and "Thirteen Ways of Looking at a Blackbird," winning the National Book Award in 1951 and again in 1955, the same year he received the Pulitzer Prize.

Stevens was not the only American multi-talented, multi-tasking artist businessman. Stevens' contemporary Charles Ives (1874-1954) also attended Yale, studying under composer and educator Horatio Parker. Ives also worked a day job at an insurance company, first with Charles H. Raymond & Co. and then with his own Ives & Myrick. During his lengthy career as an insurance executive, Ives was responsible for developing creative ways to structure life-insurance packages for the wealthy, laying the foundation of the modern practice of estate planning. Ives published Life Insurance with Relation to Inheritance Tax in 1918, the Bible of estate planning at the time.

Ives was the son of George Ives, a U.S. Army bandleader in the American Civil War, who had a profound creative influence on him. Ives often listened to his father's marching band in the presence of other bands simultaneously, delighting in the clash of keys, times, and tempi. George Ives's unorthodox music instruction also strongly influenced Ives. George Ives had an open-minded music theory that led him to encourage his son to toy with bitonal and polytonal harmonizations. Ives would often sing a song in one key, while his father accompanied him in another key.

It was Ives' father who introduced him to the music of Stephen Foster, beginning the composer's life-long flirtation with incorporating American popular, church, and patriotic music into his own compositions. Like composers of the 17th and 18th centuries, Ives was a church organist, writing various hymns and songs for church services, including his Variations on "America." In many ways, Ives was the American Bach.

Ives composed in several idioms, including orchestral, symphonic, and solo piano music. His music was championed by Virgil Thomson, Leonard Bernstein, and Michael Tilson Thomas. But perhaps his creative monument was his 114 Songs which Ives privately published in 1922 at his own expense. Far from a vanity gesture, Ives wanted to make his music available to a wider public. He did the same for some of his instrumental compositions, including his Concord Sonata. Perhaps the only consistency in Ives' compositions was liberation from the rules. Ives delighted in clashing theories and practices. This was evident in his vocal as well as his instrumental music. Perhaps Ives is not the American Bach, but because of these songs, the American Schubert.

Ives has been enjoying a revival in recent years. Naxos Records has just completed its six-volume survey of Ives' 114 songs. This series, as well as other related releases, will be the focus of several upcoming articles. Charles Ives was an American original who justly deserves greater exposure and re-exposure. His 114 Songs have appeal for everyone, ranging from church hymns, to love songs, to college songs, to popular tunes. Ives and his music are as American as apple pie.