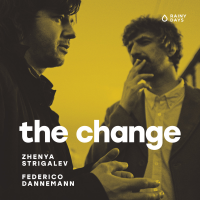 Zhenya Strigalev and Federico Danneman previously recorded together on Strigalev's Blues For Maggie (Whirlwind, 2018), but with the possible exception of that album's penultimate track ,"Little Struggle," the fare offered there differed a little from what's on offer here. The Change unequivocally oozes rock-infused take-no-prisoners jazz. Perhaps the nearest comparison to this band, and this is no hyperbolic comparison, would be Tony Williams' Lifetime. Ok, it may lack the genius of Larry Young but it's more than compensated for by Strigalev's fluidly articulate alto and Dannemann's dynamite guitar, which at times channels both Jimi Hendrix and John McLaughlin, simultaneously. Dannemann's Fender Stratocaster undoubtedly has "the tone" that McLaughlin invoked on the debut Lifetime album, Emergency! (Polydor, 1969), and its successor Turn It Over (Polydor, 1970). This therefore results in totally compulsive listening. The opening track, "Algo Rhythm" is a perfect testament to this intense, high-powered style of fusion, with Dannemann's bluesy-jazzy guitar licks dominating his self-penned number.

The urgently-paced "Pulse" is vamp-rich with sparring alto and guitar bouncing off the sonorous bass and crackling drums. Strigalev's sinewy alto predominates on "Boo," with closing, elegant Hendrixian guitar notes. "Coquille Du Terre," with its boppy sensibility, springs forward with unison guitar and sax before Dannemann lets rip with his florid guitar solo. "Speed Up" is buoyed by incessantly changing, rapid-fire riffs and an inherently bluesy feel. The slow-burning title track is embellished by Dannemann's lithe vocals and echoey guitar creating a hypnotic feel. Calvaire's taut drum foray throughout the ironically titled "Total Silence" is spectacular, as is the insouciant way in which the band later changes from a rock-edged beat to a reggae one. Even Strigalev's hilarious shout-out of the musician's names here is endearing. "Pank" is the killer closer, with more unison playing, memorable melody lines and virtuosic soloing all round.

In their inspired recruiting of New York-based Luques Curtis on bass and Obed Calvaire on drums, Russian maestro Strigalev and Argentinian-born guitarist Dannemann have assembled a literally world-class group, but more importantly, a quartet of supremely talented musicians who gel together seamlessly. Strigalev brought the band back to his native Russia to record this album at Dobrolet Studios in Saint Petersburg, and significantly the sonic quality is every bit as good as anything achieved in NYC or London. He and Dannemann have produced an album of consistent fascination, exceptional replay value and very probably a landmark recording too. If "change" means that we should keep changing to progress and grow, this album is the living embodiment of that word. It has taken Strigalev and Dannemann's musical journey to the next level.

About Zhenya Strigalev and Federico Dannemann