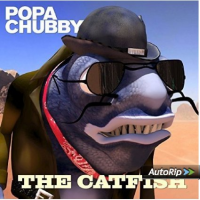 Popa Chubby sees life like this: "Everything is breaking down. The lines are being redefined." With his shaven head and tattooed arms, Chubby—born Ted Horowitz in New York City—may seem an unlikely commentator on the way the world is going, still less someone warranting inclusion on a jazz website.

But right away, as he struts his considerable stuff, you realize that appearances deceive, that this is someone way out of the ordinary. Although he very definitely came from somewhere, he arrived via a circuitous route. He describes his guitar performance style as "the Stooges meet Buddy Guy, Motörhead meet Muddy Waters, and Jimi Hendrix meets Robert Johnson."

Plus, "Wes Is More," one of the original numbers on this, his latest album, is a slow blues that quite brilliantly evokes Wes Montgomery but without slavishly imitating Montgomery's trademark octave style.

Mind, it's followed by the nerve-shredding "Motörhead Saved My Life," a reminder that Chubby started out playing punk. Looking back on those days, he says, "Musicians like the Ramones and the Sex Pistols weren't just bands. They were a threat to society." Even though he has evolved a great deal since, he still likes his music to be what he calls dangerous.

With this in mind, an accompanying booklet opens with a picture of Chubby threatening the reader with a baseball bat. But make no mistake, Popa Chubby is much more than his image. When he's finished doing outrage, he likes to push the possibilities of his playing. He even makes instructional videos.

No doubt about it: Popa Chubby is a man of many parts.

"Blues For Charlie" has nothing to do with Mr. Christian. It was written for those who lost their lives in the Islamic terrorist attack on the French satirical magazine Charlie Hebdo.

Well, maybe he does. The album includes a masterly instrumental version of the old Everly Brothers' hit "Bye Bye Love."