Rahsaan Roland Kirk: The Case of the Three Sided Dream 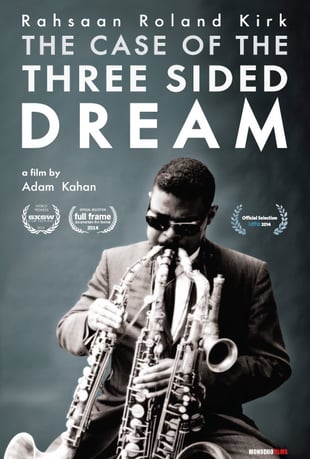 Rahsaan Roland Kirk as the natural successor to Bird and Coltrane? It's certainly a debatable point, and it might overlook the place of Sonny Rollins and Ornette Coleman in the evolution of saxophone playing during the first post-bop generations, but The Case of the Three Sided Dream, a documentary directed by Adam Kahan, makes a tenable case for reassessing the multi-reed player's role in reshaping jazz history, and not just because he could play three reed instruments at once. Even if the testimony to Rahsaan Kirk's greatness derives from interviews with family, friends, and surviving bandmates such as Steve Turre, the documentary maps out enough of his career accomplishments in vintage clips from TV and concert appearances to tell the straight story of how he always quested after his dream of an all-inclusive, multi-textured sonic palette and the unbounded improvisational freedom that is at the root of any "free jazz" impulse. The film's squiggly retro graphics and animation are amusing frame-setters, but what typically drives home the case for its subject's achievements are several carefully-placed explanations by Kirk or his fellow musicians of his unorthodox creative choices. For instance, when he plays the "apple pie" melody of "Sentimental Journey" on one saxophone while taking an Afrocentric turn on a figure from Dvorak's New World Symphony on another, Kirk is not merely acting as a self-proclaimed one-man horn section. Always struggling against attempts to disparage his simultaneous playing of two or three reeds as a gimmick, Kirk's most ambitious displays of spontaneous creativity fuse otherwise disparate musical categories and traditions.

To claim that he relied on both sides of his brain to extract the musicality of and synthesize whatever he heard—including street noises and, as shown in one memorable home-movie clip, animal sounds at the zoo that he answers with his sax while his young son rests on his shoulders—amounts to a vast understatement. Yet, bound as it is to the chronological sequence of its subject's resilient life and unflagging inventiveness, the documentary lags at times when it fails to edit down some of the interviews, especially when they repeat similarly banal observations on Kirk's stamina or love of talking. What's far more engaging is the direct presentation of his provocations, such as his leadership in a civil rights-inspired initiative to literally and disruptively "blow the whistle" as members of studio audiences on TV shows like Dick Cavett's that did not feature enough (or any) jazz artists. As a result of such actions, Kirk was able to land a spot on the Ed Sullivan Show in 1971, fronting a band that included Roy Haynes, Charles Mingus, and Archie Shepp. With Captain Kirk at the helm of his Trojan Horse troop, the group delivered a pugnacious version of "Haitian Fight Song" instead of the more docile "Ma Cherie Amour" that the show's producers expected.

This documentary may continue to provoke discussion about a provocateur extraordinaire's contributions to post-bop jazz history. There is no doubt, however, that the story, starting from the destruction of the infant Kirk's corneas by too high a dose of silver nitrate, ending with two triumphant years of playing with one hand after his 1975 stroke, and never ceasing to find bright moments all the way through, is worth telling in its own right.