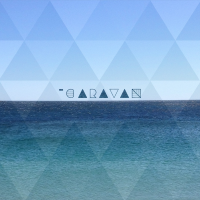 The Caravan, the self-titled second album from a Halifax, Nova Scotia-based hybrid hip hop trio, has attracted attention for the track "What Up Steve?." It's a new kind of political protest record for Canada, a reaction to the new kind of conservative politics practiced by the Stephen Harper administration. But "What Up Steve?," whatever its effectiveness, only partially represents the musical breadth of the record.

The album merges the easy-going collective sensibility of the Maritime Canadian kitchen party music session with that of rap music. A rap kitchen party would possibly draw upon banjos and pedal steel guitars, as this record does, but also turntables and album collections. In "The Groove," a saucy chorus exhorts everyone to "call your friends and pull all your records out."

Do that in the Maritimes, and one of the records pulled out might possibly be Scottish tenor Niven Miller's earnest "The First Thing I Do," which the Caravan samples on their tune of the same name, possibly the best on the record. Miller's 3/4-time religious song (the first thing he does in the morning and the last thing he does at night, most probably, is pray) is playfully but reverently set across the 4/4 hip hop beat; it's not sampled ironically, but indeed lends the tune its irresistible hook. Rapper Kyle McKenna, inspired by the spiritual theme, muses about the discipline of artistic betterment: "Crack a cup of coffee/ Open my eyes up/ And analyze on the back porch/ Til my time's up/ Try to find a better way to rhyme the lines up."

McKenna's flow can trace its lineage back to Melle Mel (of Grandmaster Flash and the Furious Five), with whom he shares verbal dexterity, a clarity of diction, and like whom sounds as though he's rapping through a smile on the verge of turning to scorn. He's a particularly literary MC, with a penchant for words-as-words. An alliterative outbreak on "First Thing" provides an idea: "I hit the street and get the context concept/ I keep it complex/ Like a con man's conscience/ Constant compliments are common constants/ I cross the roads/ But keep on with your comments." Another rap is entitled "Words That Make You Feel Good."

As for the musical backing, the Caravan favors wistful, plain-spoken melodies, characteristic of East Coast Canadian artists for several decades and many genres; these, when performed on Mike Ritchie's synthesizers, sound a little like some indie-rock bands (e.g. the xx, Beach House). Sometimes the lightness of the synths undercuts the ferocity of the music, as on "What Up Steve?" or the more trenchantly political "Pros and Cons" (What might hip hop producers El-P or RZA might do with the latter track?). But generally the combination of the airy melodies, lighter mix and McKenna's thoughtful raps—powered by Mark Bachynski's crisp, funky drumming—is genuinely novel and appealing.

Intro; The First Thing I Do; Flex The Flow; The Groove; Ghost In Your Heart; Words That Make You Feel Good; What Up Steve?; Pros and Cons; Big City; Mesmerize; Untitled.