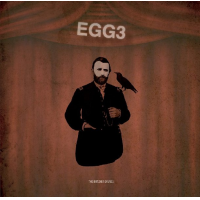 The marriage of jazz—in all its incarnations—and metal may sound at first as a sacrilegious act but not for a creative musician in the vibrant Norwegian music scene. Norwegian metal bands defined the black metal sub-genre in the eighties and nineties. Moreover, the young generation of Norwegian jazz-trained musicians ignore the American strictly codified version of jazz and have interpreted this music as an open, inclusive one. So why bother with theoretical arguments about clearly defined musical genres and not simply enjoy the music.

The Stavanger-based trio EGG3 does not bother itself with such tiresome discussions. And It is not even the first Norwegian band to embrace elements of metal. The modern jazz Shining already have morphed into a metal band, that calls its music black jazz, with great success. And from the other side, members of the prog-metal Enslaved teamed with avant-garde improvisers Maja S.K. Ratkje and Hild Sofie Tafjord to form the Trinacria band.

The music of EGG3 is a reverential mix of references, sounds, and demented ideas thrown into a boiling sonic palette. All contribute to the impossible to classify the end result. Obviously there's the typical blasting drumming, the nasty distorted guitar, and the dark ritualistic structure of metal suites. But Breistein's uncompromising sax attack borrows from the European version of the fiery free jazz, owing much to sax titans as Peter Brötzmann and Mats Gustafsson, and Schanche pays his respects to King Crimson's guitarist Adrian Belew. The trio's sonic spectrum, as expected, is more varied of metal or high-octane free jazz outfits, and its unholy mixture of influences embraces elements of prog-rock, the eccentric humor of Frank Zappa bands or joyful, punkish outbursts à la Motörhead.

The adrenalin-soaked energy of EGG3, with its tight interplay, produces a highly effective music. "The people under the stairs," one of the best realized pieces, moves cleverly between a metal anthem with a mean, infectious guitar riff and and a claustrophobic atmosphere powered by Breistein's sax and inventive usage of noisy samples. The massive hammering on the drums of Birkeland on "Vengeance" and the constant shift of the pulse feature the trio as a highly orchestrated and unstoppable unit.

Regardless of genres purity and stylistic refinement, EGG3's music offers tons of fun.

Ladi De GaGa; Darkest of them all; Red, bring the head; Now panic; The people under the stairs; Vengeance; Ikkje tull Knutsen.