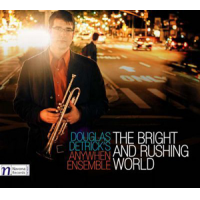 Go ahead, ask the question, "But is it jazz?" Douglas Detrick's Anywhen Ensemble presents the ten movement suite, The Bright and Rushing World, a continuous piece of music, commissioned by Chamber Music America. So maybe it isn't jazz.

Detrick's ensemble contains a jazz drummer Ryan Biesack, who can be heard on Pieces (OA2 Records, 2013), a jazz recording by saxophonist Hashem Assadullahi, also a member of Detrick's ensemble. Ok, so it is jazz. But there is also a cellist, Shirley Hunt and Steve Vacchi's bassoon on this recording. Okay, let's back up a bit. The Anywhen Ensemble has played folk music with Wayne Horvitz, and their previous release was Rivers Music (Origin Classical, 2011). So is it classical?

If we ask Gil Evans or Gunther Schuller, they will say it's jazz. So would George Russell, Ornette Coleman, and probably Duke Ellington would tell us, "It Don't Mean a Thing, If It Ain't Got..."

That's right, this chamber ensemble's got that swing. A sly, deft swing that intermeshes a composed score with improvisation. The instrumentation implies classical, but then so did Eric Dolphy's bass clarinet and remember Oscar Pettiford's switch to cello? The instrumentation is but a delivery device. Detrick's piece moves seamlessly between composed and improvised parts. Mallets are swapped for drumsticks, a cello is bowed and plucked. Then there is Detrick's bright trumpet work, it is as glistening as any classical player, yet, like Dave Douglas, it can growl and pop evocative jazz sounds. The longest piece on the recording is "A Question So Weightless It Floats Away." Here, the suite's general theme is deconstructed into various call-and-response parts, cello/trumpet, drums/saxophone and bassoon flesh out Detrick's theme. Assadullahi's soprano saxophone exchange with Bieseck leave no doubt this music is jazz. The pair uncover an impassioned passage worthy of a late night jam session, yet suited to this suite. This is joyous, classifiably unclassifiable music.

The Door Is Open; And You Watch As He Goes Out; A Seeker, Insubmissive; Into The Bright And Rushing World; Who, Over Years In Your Care; You Never Thought To Give A Name; You Gasp And Ask Aloud; How Can You Live Without A Name?; A Question So Weightless It Floats Away; On The Wind of His Leaving.