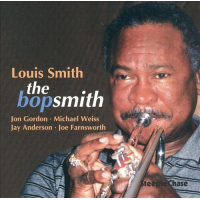 He’s one of the guys you probably never knew was still around. Trumpeter Louis Smith has become the stuff of legend, especially among Blue Note collectors who proudly cherish the two sets for the label that bear his name. In Michigan, where he currently resides, Smith is somewhat of a household name among jazz fans and he’s usually on hand for Detroit’s Ford International Jazz Festival. For many years now, the trumpeter has also been a favorite of SteepleChase producer Nil Winther and a sizable catalog of Smith led sessions have been the result, with The Bopsmith being the most recent.

Although past Smith SteepleChase sides have found him working with such names as Vincent Herring, Kenny Washington, George Cables, and Junior Cook, this may be one of the most finely integrated units to back Smith to date. Alto saxophonist Jon Gordon’s tart sound fits in ever so nicely with Smith’s decidedly bebop outlook, while pianist Michael Weiss provides the kind of tasty support that has made him a favorite accompanist to such performers as the incomparable Johnny Griffin. Finally, bassist Jay Anderson and drummer Joe Farnsworth form a tightly knit rhythm team that keeps things moving along properly.

No surprises here as to the material, with bop and standards the order of the day. Even Smith’s two originals, “Val’s Blues” and “Ed’s Love” (the title is a play on words involving the name of Detroit deejay Ed Love, although the liners don’t allude to this fact) are squarely in the mainstream. This is where one could pick a bone of contention if feeling inclined to do so. There’s a manner of similitude to much of the material that prevents this from becoming a five star affair, yet bop fans will still find much to enjoy and the individual contributions of the band members are definitely worth a listen.