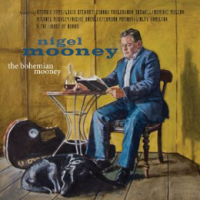 The island of Ireland has a long and impressive history of great blues singers—Van Morrison, Rory Gallagher, Phil Lynott all brought a raw, bluesy, intensity to their performances. Singer and guitarist Nigel Mooney has been on the Irish blues scene since the '80s and his jazz-inflected take on the genre is shown to enjoyable effect on The Bohemian Mooney.

Mooney may not have the rough-edged aggression of Lynott but the blues is still very definitely at the heart of his style. Mooney's voice is lighter and more welcoming, inviting the listener to share his experience rather than to be wary of it: a characteristic he shares with James Hunter or Georgie Fame, who guests on "Down For Double" and "How Blue Can You Get."

Mooney's not shy of tackling the darker side of the blues. Robert Johnson's "Hellhound On My Trail" epitomizes that dark side and Mooney gives it his most despairing performance. The mood is heightened by the sudden wail of Eamonn Murray's ghostly harmonica solo. It's the exception to the overall mood of good-natured complaints about lost love and commercial failure, though. Mooney's "I Ain't Ready" and "Unlucky In Love" and Fame's "How Blue Can You Get?" all plough this furrow of regret and disappointment with a sly grin and a shrug of the shoulders—and swinging grooves that lend themselves to dancing the blues away. Mooney gives "April In Paris" a swinging, Count Basie, arrangement complete with Michael Buckley's rousing tenor sax solo.

The enigmatic "Dr Legin Yenoom" contributes occasional piano and tambourine. He's also, according to the credits, available for French lessons so he can perhaps take credit for Mooney's vocal on "C'est Si Bon."

The Bohemian Mooney, like lots of good blues, has an ability to deal with life's tragedies and pitfalls while still making its audience feel good. Mooney sounds like he's lived the ups and downs, dealt with a few hard knocks, but still keeps on keeping on. After all, as he sings himself, how blue can you get?

I Ain't Ready; Ain't That Love; Down For Double; Unlucky In Love; Hard Times; April In Paris; The Bohemian Mooney; Hellhound On My Trail; C'est Si Bon; How Blue Can You Get?; Bohemian Moondance; Farewell To Bohemia.