By DAVE NATHAN
January 1, 2001
Sign in to view read count 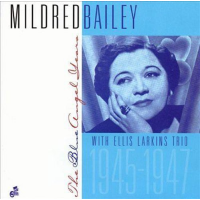 In 1944 Mildred Bailey was getting back on track after the end of the disastrous recording ban which almost ruined her career as well as that of other performers of jazz and popular music. Fortunately, she was offered a radio show by CBS and when Max Gordon, who also had the Village Vanguard, opened his new Blue Angel jazz venue, Bailey signed on with a trio headed by a young pianist named Ellis Larkins. She remained there until 1947. Baldwin Street Music has found several recordings from this period of Bailey's life as well as a few from sessions with groups other than than Larkins.' Of the 22 tracks, three are previously unreleased and nine have never been reissued on CD.

Bailey had a small feathery voice in a big body, which some say made her look matronly preventing her from achieving the popularity she deserved. Nevertheless, few could sing with such a natural and unaffected a manner.. A great admirer (and friend) of Bessie Smith, she was one of the few white singers who understood the blues as sung by the black masters of the genre and this understanding is reflected in the way she developed and honed her craft. She was intense without resorting to being overly emotional. Just listen to "I'll Close My Eyes" which makes the listener feel he or she is privy to an intimate conversation between Bailey and her paramour. Her version of "Can'‘t Help Lovin' That Man of Mine" rivals Billie Holiday's as the archetypical rendition of this classic. Of the tunes she cut with Larkins, "Can't We Be Friends" epitomizes the musical relation they built during the few years they were together. Larkins' work with Bailey forecast a career that made him a highly sought after partner by singers, like Ella Fitzgerald and Sylvia Syms, whose voices were not at all dissimilar from Bailey's.

This album is typical of the high quality Baldwin Street Music builds into its releases. The sound is superior, the liner notes interesting and intelligently written and there's a bonus track with snippets of other releases from the label.