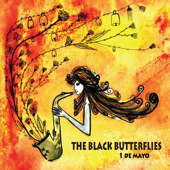 While this is just the debut release from The Black Butterflies, a group led by 27-year-old saxophonist Mercedes Figueras, veterans would do well to prick up their ears and take note. The Butterflies deftly blend the Latin rhythms of Figueras' native Argentina with free and post-bop noodling and tantalizing natural-world percussive elements, into full, invigorating music that sprouts, twines and flourishes over the 63-minute span of this entirely satisfying album.

The title track kicks off the record. It is a relaxed, comfortably humid piece that sways from a melodic opening into more forceful strains on the wind of Figueras' sax and swingingly persistent conga thumps. The piece never reaches—nor even strives for—the anthemic quality the title might suggest. Instead, the labor sweats happily, singingly under the sun. Appropriately, the tune—and, thus, the album—takes flight on the crystalline wings of Dan Tepfer's echoing, solo keyboard statement. It's appropriate not only for fashioning a sly musical equivalence to the band's moniker, but by spotlighting in Tepfer one of the group's, well, keys. Tepfer's polished electric tones lace the Latin rhythms and strings them up on a brightly modern line that still never smoothes the crisp, pulsing edges of the traditional beats. As mentioned, it's this facile navigation of divergent musical fields and the ability to rake loose from the passage a lively new hybrid that makes listening to The Black Butterflies so palpably intriguing. Ears laugh at their good fortune.

"Afro Blue," with its inevitable rekindling of saxophonist John Coltrane's spirit, also sparks the ghost of Albert Ayler, the twining sax statements of Figueras and her (even more?) experimental mate, Tony Larokko, rendering the Coltrane vehicle as a mighty, squealing, squawking, melodically impassioned conversation between the lost giants of the avant-garde. The saxophonists pause for a breather midway through, revealing front and center the rolling-thunder percussion the listener's body already knew was there. Tepfer contributes another light yet zinging solo over the drums before backing off to give conga man Bopa "King" Carre, percussionist Fred Berryhill and drummer Kenny Wollesen even more space to break loose and rumble.

The first of Figueras' two original pieces on the album, "Pipi's Blues," follows "Afro Blue" with the type of jumping cadence saxophonist Joe Henderson might have favored with the mid 1960s support of pianists McCoy Tyner or Andrew Hill. Only here Tepfer remains electric, adding the swirling bluesy punch of organist Jimmy Smith, while also not refusing to jut off on Larry Young-like angular departures.

Larokko contributes the next two numbers, "Spiritual Travels" and "Yah-Yah," the first a jolting, percussion-heavy piece full of strong repeated sax figures that again recall the journeys of Ayler. The latter, the album's most experimental piece, evolves from whistles and an array of percussion instruments that erupt into a cacophony of insect and animal noises—nature's nighttime rhythm section—that in turn give way to the African chants that supply the song's title and the singing of Figueras. Her voice is strong yet slightly coarse and splintered like the timbre of her sax, relating in insistent, desperate Spanish the tragic tale of "Los Ojos Azules," a Bolivian song popularized by the late Argentine singer Mercedes Sosa, while accompanied by an increasingly complex and urgent layering of rhythmic human voices and drums. The whole ultimately explodes into a screeching battle of horns—the saxophones' cries themselves sounding almost human at times—that burns out through extended, passionate playing, leaving only the snaps and twangs of nature and the soft, compelling "Yah-yah, Yah-yah" chants of dancers or workers.

Yet, lest it be thought the band has gone irrevocably, unrestrainably tribal, it closes on the infectious Figueras piece, "Music Heals All Wounds," a soulful "Auld Lang Syne" with Caribbean accents. (To belabor the Ayler connection—or to kill it, finally—this most certainly is not "Music Is the Healing Force of the Universe.") Figueras' tune delivers as advertised—a warming salve that demands multiple healing doses on the spot, then lingers, replaying itself for hours in the listener's brain to pleasant, calming effect.

Yes, this is the debut release from a new band whose young leader has issued only one other record under her name, Elefante (2007), a free-improv set from Figueras and drummer Martín Visconti. But make no mistake, 1 de Mayo also happens to be one of the best overall records of 2010.