The Bizarre World of Frank Zappa Tour at The Paramount 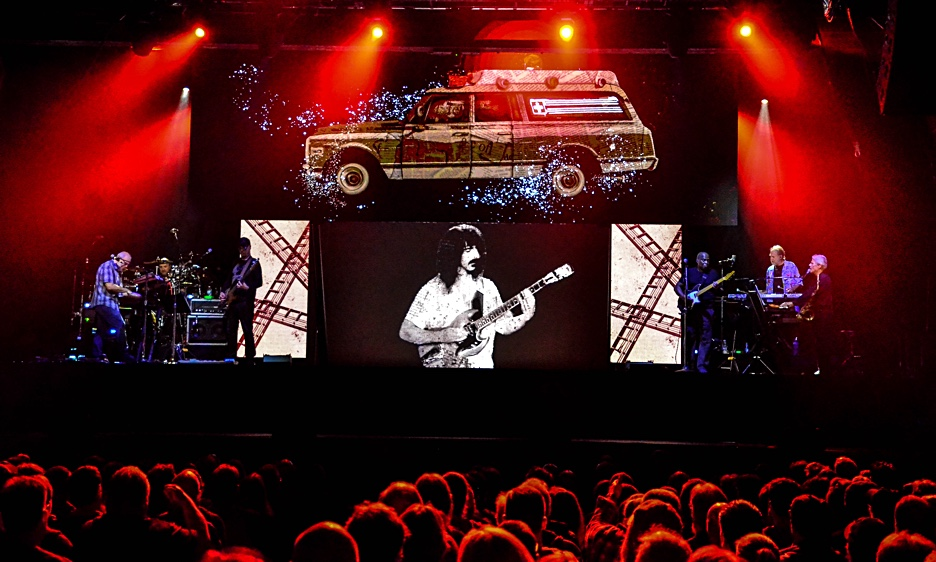 By MIKE PERCIACCANTE
May 2, 2019
Sign in to view read count
The Bizarre World of Frank Zappa Tour
The Paramount
Huntington, NY
April 24, 2019

Frank Zappa was one of the most eclectic and influential musicians for the 20th Century. The musician, composer, activist and filmmaker's work and career exemplifies nonconformity, improvisational musical themes, sound experiments and technical musical virtuosity. Satire of the American experience and culture played a huge part in Zappa's oeuvre. Zappa's career was lengthy, lasting over 30 years. He composed and released music spanning many different genres and styles—rock, jazz, pop, jazz fusion, R&B, doo wop and orchestral. During his lifetime he released over 60 albums (as a solo artist and with the Mothers of Invention). Another 50 or so have been released (or re-released in Deluxe Edition versions) since his death.

Born in Baltimore, MD in 1940, Zappa passed away in 1993. A self-taught composer, his music was often unconventional and, as a result, occasionally difficult to categorize. Zappa was posthumously inducted into the Rock 'n' Roll Hall of Fame in 1995. He received a Grammy Lifetime Achievement Award in 1997. His other honors included ranking as number 36 on VH1's 100 Greatest Artists of Hard Rock, Rolling Stone magazine ranking him at number 71 on its list of the "100 Greatest Artists of All Time" and as number 22 on its list of the "100 Greatest Guitarists of All Time."

To the passing fan, Zappa is known for the song "Valley Girl" (released with his daughter, Moon) and "Dancin' Fool." To the devotee, his musical canon takes on much more meaning. These fans worship the man for: his work with the Mothers of Invention (and the Verve Records albums which include 1966's Freak Out!, 1967's Absolutely Free and 1968's We're Only In It For the Money); solo projects such as Lumpy Gravy (Capitol, 1967), Hot Rats (Bizarre, 1969), Over-Nite Sensation (DiscReet, 1973), his Top 10 solo album Apostrophe (') (DiscReet, 1974) with its unforgettable opening track "Don't Eat the Yellow Snow," Joe's Garage, Act 1 (Zappa Records, 1979), Frank Zappa Meets the Mothers of Prevention (Barking Pumpkin, 1985); the live albums Zappa In New York (DiscReet, 1976), Make a Jazz Noise Here (Barking Pumpkin, 1991); the You Can't Do That on Stage Anymore series (the first volume which was issued in 1988 by Rykodisc) and much more.

Today, more than 25 years after his death, he remains a major influence to his fans, to other composers and, of course, to so very many musicians. This last group includes: Alice Cooper; Larry LaLonde of Primus; Devo; Kraftwerk; Trey Anastasio of Phish; Paul McCartney, who regarded Sgt. Pepper's Lonely Hearts Club Band (Capitol, 1967) as The Beatles' Freak Out!; Jimi Hendrix; Black Sabbath; Bill Frisell; System Of A Down; George Clinton and many others.

ADVERTISEMENT
In 2019, the Zappa Family Trust, headed by his son, Ahmet, in an effort to pay homage to the music and memory of Frank Zappa, along with some of the musicians who played with him during the course of his career have mounted a tour to celebrate the man and his legacy. The Bizarre World of Frank Zappa Tour combines holographic performances, outrageous visuals and a live band featuring Zappa collaborators—guitarists Ray White and Mike Keneally, bassist Scott Thunes, multi-instrumentalist Robert Martin, percussionist Ed Mann and drummer/ZAPPA archivist Joe "Vaultmeister" Travers. Eyellusion, the same folks who created the Ronnie James Dio hologram which will be touring the U.S. later this summer have developed the technology which makes the Zappa tour possible. On a pleasant late April evening, Huntington, NY's mid-sized Paramount venue was busy and bustling as the line to get into the concert hall was stretched from inside the lobby, down the block and to the corner. Inside, the multi-generational crowd was milling about and discussing what they might and might not be seeing during the evening's concert.

The performance uses quite a bit of Zappa's audio, images and video from a 1974 rehearsal recorded in Los Angeles on a soundstage. The concert melded that rehearsal performance to create a multi-media visual and audio experience. The hologram as well as cartoons, claymation, puppetry, press clippings and old performance footage breathes life into the performance.

Once the majority of the fans were seated, the evening's festivities began at just after 8pm. There was no opening act. One was not needed, and with the high-tech stage set-up, it would have been impossible to have any other act play prior to the main event.

The band members took their places on stage and with video screens above, below and behind them, broke into "Cosmik Debris" from Apostrophe (!). A few minutes into the tune, the Zappa hologram appeared, played guitar and sang the song. The hologram was set back on a screen allowing it to appear three-dimensional. As such, its movements worked best when it moved from side to side. At the end of the song, the hologram stated, "I'm as happy to see you guys as you are to see the show."

The live music was flawless and effortlessly blended with the pre-recorded audio, video and holographic images of the late musician. Highlights of the performance included "Penguin in Bondage" with its cartoon images and the Zappa hologram's extended guitar jam, "Stinkfoot," "Why Does It Hurt When I Pee?," "Trouble Every Day" (which was Zappa's response to '60s race riots), "Dinah-Moe Humm" and "The Evil Prince." There also were some very interesting moments. Ahmet Zappa appeared on the stage to handle the lead vocals on "My Guitar Wants to Kill Your Mama" from Weasels Ripped My Flesh (Bizarre/Reprise, 1970) and "Dead Girls of London." When Ahmet left the stage, the ghostly hologram took over again and led the band through the main set closer "Dirty Love."

The encores were truly a sight to behold. Frank Zappa was seen in the form of a hotdog on "Cheepnis." It made for an outrageous experience. The performance ended with the hologram and the band delivering a classic version of "Camarillo Brillo." As the last notes faded into the ether, Hologram Frank stated, "Thanks a lot, you've been a real nice audience. Good night!"

The concert was a fun trip through Zappa's extensive catalogue. It was a fantastic spectacle. The Bizarre World of Frank Zappa was a tour-de-force. Its subject would have undoubtedly loved it. Zappa was said to have been fascinated by holograms. On this evening, the hologram of his image, along with his trusted sidemen entertained, beguiled, bewildered and genuinely entertained his loyal fanbase.