Dom Minasi Septet: The Bird, the Girl and the Donkey II

By EYAL HAREUVENI
December 11, 2012
Sign in to view read count 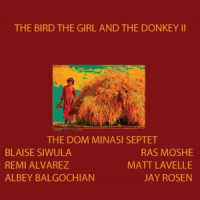 Following the successful realization of the powerful, free jazz collective headed by Dom Minasi on The Bird, The Girl And The Donkey (Re:konstruKt, 2010), the guitarist decided to expand his collective from a quintet to a septet. He kept the same attitude: intense, muscular and fiery playing from the first second till the last, but with varied dynamics and more power.

The title of the second volume, The Bird, the Girl and the Donkey II—a live recording of one 55-minutes piece—still relates to a tale about a girl who is carrying a heavy load of notes and the bird and the donkey that are called to offer their help. The addition of trumpeter Matt Lavelle and tenor saxophonist Remi Alvarez to existing saxophonists Blaise Siwula and Ras Moshe creates a thick, stormy forefront of sound. Its energetic flow is suspended briefly for brief solos from bassist Albey Balgochian, Minasi and drummer Jay Rosen. All retain the fiery sense of continuity, offering shifts into raw and restless interplay and sonic searches of varied duets and trios before the septet unites again, gaining more volume and power until the next and final volcanic eruption.

The authoritative and inventive Lavelle introduces the main segments of this extended piece, and marks its climaxes. His ferocious, physical playing contrasts the playfulness of the sax choir, and the solos of all four saxophonists. Minasi's metallic lines, Balgochian's dense arco, and Rosen's rolling drums push and fortify the sonic envelope with an uncompromising, driving pulse. This sextet's powerhouse collective playing recalls the raw power of Peter Brötzmann's Chicago Tentet, while the elegant dynamics of the four saxophonists bring to mind the World Saxophone Quartet.

An impressive document of powerful and inventive free jazz.

The Bird, the Girl and the Donkey II.