Dom Minasi: The Bird, The Girl And The Donkey

By DAN BILAWSKY
January 7, 2011
Sign in to view read count 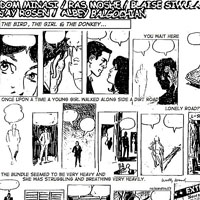 This music is like a shot of adrenaline to the heart. It's full of energy and raw power, and it brings a little bit of pain along with it. This quintet delivers ferocious avant-garde music that, essentially, runs full tilt from beginning to end.

Guitarist Dom Minasi's name is at the top of the marquee, but the music on The Bird, The Girl And The Donkey is delivered by a collective presence; Minasi is, in fact, one of its least dominant voices. Tenor saxophonist Ras Moshe and altoist Blaise Siwula provide free-blowing histrionics that often overshadow the guitarist, while drummer Jay Rosen dominates the bottom end. While some leaders might be upset by this turn of events, Minasi is clearly a gracious man, and the theme of this album deals with spreading the weight across an ensemble.

The title comes from a pseudo-fable that's featured in the liner notes, a tale about a girl who is carrying a heavy load and the bird that offers to help her. The bird, in turn, calls on a donkey for help, and the donkey assists the girl in carrying the load to her destination. Minasi shows his sense of humor when he reveals that the package contained all the notes that the Dom Minasi Quintet needed to record its album, but the moral is that "if you're going to play a lot of notes, you better have some great musicians to help."

Minasi found his great musicians, and each man does his part on these lengthy works. While a good amount of this music is built from webs of overlapping sound, the ensemble is savvy enough to alter its modus operandi as the music develops. Moshe and Siwula play against each other in a variety of ways, keeping everybody on their toes. Moshe can provide deep bellowing tones more in line with a baritone saxophone, or string broken lines over a stormy rhythmic bottom. Siwula provides some high pitched cries, but can also swoon and moan when intersecting with Moshe. Minasi can't always cut through the clatter, but he makes himself part of the mix beneath it, standing out when it counts. His work shows extreme clarity when the rest of the ensemble drops out, leaving him alone, late in "Atmospheric Meeting," while his chordal work on the title track provides rhythmic direction in a storm of sound, and he delivers some stellar guitar work over Rosen's drumming on "Hey Cowboy."

While this music is certainly free, it isn't always a free-for-all, and group communication is evident through the alterations in mood, density and instrumental combinations. With The Bird, The Girl And The Donkey, Minasi present a democratically stable form of extreme improvisation that confounds, challenges and connects in all the right ways.

Atmospheric Meeting; Stop Ringing Those Damn Bells; The Bird, The Girl And The Donkey; Hey Cowboy; Sonia's Back. No Really, Her Back.

Title: The Bird, The Girl And The Donkey | Year Released: 2010 | Record Label: Self Produced