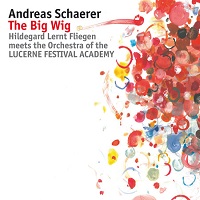 The Orchestra of the Lucerne Festival Academy and the sextet Hildegard Lernt Fliegen come below Andreas Schaerer on the billing on this CD/DVD offering, suggesting the star quality of this unique contemporary composer/vocalist. The Big Wig suite— composed and orchestrated by Schaerer—comprises newly composed material and reworkings of several tunes from Hildegard Lernt Fliegen's The Fundamental Rhythms of Unpolished Brains (2014). Schearer's wildly colorful, idiosyncratic narratives and his operatic vocals lend themselves well to the orchestral setting, while the sextet that he's led for over a decade swings between highly disciplined ensemble interplay and looser improvisational freedom. The overall effect is music that's never less than engaging, and at its best, highly intoxicating.

"Seven Oaks" bursts upon the Lucerne audience with the intensity of a thriller score climaxing, but it would take a Terry Gilliam script of hallucinatory surrealism to harbour Schaerer's fantastic imagination. So dense in imagery are Schaerer's lyrics—poetry in truth—that it's practically a lost cause trying to decipher them aurally. The CD's accompanying booklet only contains the lyrics to "If Two Collossuses," which, whilst not shedding much on the composition's meaning, serves at the very least to highlight the composer's complex, yet visceral wit and imagination. The music, happily, does the same job.

Shaerer utilizes the sixty-piece orchestra with a flare occasionally missing from jazz-meets-orchestra collaborations, although jazz, here, is certainly too reductive a term. At his most nuanced, Schaerer's almost whispered vocals evoke a latter day Robert Wyatt, while the extremes of his multi-octave voice are operatic. A little of both these facets are heard on the haunting "Preluidium"; dual harps and softly voiced strings cushion Schaerer's hushed opening delivery before the full might of the orchestra—conducted by Mariano Chiacchiarini—rises to Andreas Tschopp's piercing trombone solo. The juxtaposition of jazz swing versus rhythmically pulsing strings runs through the music like a stream, sometimes subterranean, sometimes gushing forth in full view.

A vocal acrobat, Schaerer struts the high wire on "Zeusler," his high-pitched wordless song picked up and carried by the strings. On "Wig Alert," the leader juggles beat-box simultaneously with humming, bird-song and clucking that conjures the dawn stirrings of a tropical jungle. It's the prelude to a percussion extravaganza, with six percussionists on marimbas and vibraphones engaging in exhilarating synchronicity and counterpoint -the exuberance and joy of which is only fully captured on the DVD. Likewise, only the DVD records Schaerer taking Chiacchiarini's place at the orchestra's helm on "If Two Colossuses," his animated and highly personal language of conducting—on a composition of tempestuous abstraction and operatic ambition—lying somewhere between Rafael Payare and Frank Zappa.

Schaerer's human trumpet mantra kicks off the show-stopping "Don Clemenza," drawing trombone and saxophone into his orbit as a sense of impending drama escalates. Schaerer's soprano vocals soar like an opera diva as bassoon and bass lock into a hypnotic groove, with marimbas and trombone striking up their own insistent rhythms. Benedikt Reising's baritone saxophone revs up and tears away, spluttering and roaring like a rambunctious Harley. The orchestra awakens, trombone embraces ecstatic free-improvisation and Schaerer's high-pitched vocals fly once more, as all the pieces of the sonic jigsaw come spectacularly together in a bone-shuddering finale. Schaerer's unapologetically theatrical Big Wig is an admirably sophisticated yet gutsy delight. Trashing musical boundaries with unconcealed gusto, this madcap sonic sorcerer continues to chart a very singular course in contemporary music. Roll on the next chapter.