By REX BUTTERS
September 3, 2004
Sign in to view read count 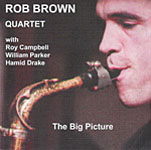 Rob Brown's Big Picture Quartet includes William Parker, Hamid Drake, and Roy Campbell, the band responsible for the sublime Raining on the Moon with Lena Conquest, recorded as the William Parker Quartet, as well as playing together in different configurations yielding some of the most vital and essential recordings of the last decade. In the grand jazz band tradition (think Sonny Greer and his Memphis Men), the music's flavor and quality maintains whoever's name shuffles forward. These four veteran collaborators create their signature sound of abundant grace, heartbreaking beauty, and righteous swing bleeding blues.

A smart, brisk Brown and Campbell duet settles into "Dawning," followed with a solidly crafted Parker/Drake duet laying the song's foundation. Brown and Campbell double the mellow theme with some harmonies, then Brown reveals the tune's possibilities with Parker stoic and Drake tastefully busy in time. After Brown's sweet toned song, Campbell's dry trumpet turns the ear piquant. He navigates the minors low and soulful building a ladder to the sky. Parker casually digs into the wood with his propulsive plucks, stepping back for Drake's sleight of hand.

The genie comes out of the bottle on "Islands of Space," introduced by a Drake drum display leading to an Ornetteish theme, then a Brown duet with Drake that at one point recalls Coltrane and Ali's Interstellar Space. Parker and Campbell mix it up with them, then Brown drops out so the remaining trio can romp as one. As 4 am bluesy a ballad as you'll hear, "Wyoming Song" has Brown and Campbell in tight arrangement before an improvised conversation. Campbell takes over with Parker walking, then Brown rejoins. Campbell and Drake sit back and listen to Parker and Brown unfold an extended golden interlude.

Back in the fast lane for "Trio Unsprung," without Campbell as the title implies. Brown gets a chance to stretch out tell some of what he knows with Drake and Parker working overtime. Parker pulls the bow for his solo, and Drake keeps the plane at cruising altitude. Brown dusts off his unique flute tone for "Blues Thicket," engaging Campbell in the moody ballad. Finishing with a bang, "Legroom" begins fitfully, but Brown blows through with Drake and Parker bringing plenty of gas to the firestorm. Campbell allows no letup on his watch, going high and outside before everyone drops out to let Parker get nasty.

Recorded in Paris, this collection showcases Brown's exquisite talents and those of his fellows, all four preeminent purveyors of the New York sound.