By MARK CORROTO
September 22, 2006
Sign in to view read count 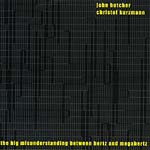 If industry and our modern industrial climate has created what sociologists call the "modern primitive, then British saxophonist John Butcher is certainly one of today's original men. His saxophone style has unique originality, that's for sure. It is as if he could have picked up a bicycle or a carp and proceeded to use them to communicate with us. It just so happens that he plays the saxophone.

Like his frequent partner Axel Dörner (trumpet), Butcher tends to never sound anything like the horn he puts to his lips. At first he explores extended techniques, then he soon gives way to electronic manipulation. Paired with the Vienna-based electronics musician Christoff Kurzmann, Butcher spreads out his sounds here, possibly responding to Kurzmann's manipulation or using them as a means to engage his Lloopp accomplice.

The opening "Aume is a meditation on the minimalism of breath and touch, with a constant current of nervous energy propelling your ears. "Bee Space pares things down further to an almost acoustic feel, before samples overlap and we understand the echoes of manipulations. The eerie science fiction of "Schilling, as opposed to the spooky feel of "Shilling (check the spelling), could be a partial soundtrack to a 1970's low budget space movie. (On the other hand, "Shilling has the feel of a stalker movie soundtrack.)

But then again, I could be wrong.

The sounds created by Butcher and Kurzmann allow for flights of the imagination, as opposed to meditation.