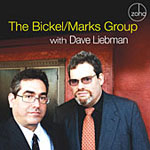 Doug Bickel and Dennis Marks have been playing together since 1987 when they were at the University of Miami. They formed a band and recorded a demo with alto saxophonist Matt Vashlishan and drummer Marco Marcinko in 1991, but nothing came of it. Both went on to become academics, while keeping music within sight with their own projects and in other bands including those of Woody Herman, Maynard Ferguson and Arturo Sandoval, where they found a common home.

Time has come full circle with the opportunity to record this CD. The original line-up was augmented by saxophonist Dave Liebman, who had met the group when he played with the University of Miami Concert Jazz Band 20 years earlier Liebman's sense of adventure sits in well; the compositions are open enough for his distinctive concepts, and for the others to infuse their own sense of progress and development, as "Sparrows and Didewinders" remarkably shows.

The melody is infectious but the early manifestations are turned around by Liebman, through fiery and trenchant phrases. Vashlishan meets him on the high road to invention, his playing vibrant and powered by a drove of ideas. Into this comes Bickel, who shifts the pulse into a gentler domain, his piano sprinkling a shower of luminescent notes. The ambit has changed, but the lure of the song remains consistently appealing.

"On the Outside Looking In" is a beautiful ballad, with Bickel and Liebman (on soprano saxophone) drinking deeply from its well to make the tune unforgettable with their magnetic impulses.

Hard bop drives "Truncated Theme," the head giving no indication of the body which makes the enterprise all the more delightful. Bickel escarps his drive with a welter of notes that sing joyously, the plinth torn into by Liebman's brawny tenor. Marks solo percolates and kicks in intriguing whorls, the extrapolation adding deeper shades.

It may have been a long time coming, but the music here was worth the wait, as the band holds it all together with aplomb.

Sparrows and Sidewinders; Finding Your Way; Home; Turnover; Do I Love You Because You Are Beautiful; The Jazz Behemoth; On The Outside Looking In; Truncated Theme.