Bobby Hutcherson: The Best of the Blue Note Years

By MICHAEL FORTUNA
July 1, 2001
Sign in to view read count 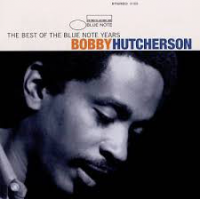 Most of you would pick the legendary Lionel Hampton, who played in Benny Goodman's band, among others. Some of you would name Milt Jackson, who's one-fourth of the Modern Jazz Quartet.

But what about Bobby Hutcherson?

Thumbing through some jazz history books, you might find a page or two mentioning his name in passing, which is a shame. Not many people can make the vibes swing or sing, and Hutcherson should be added to the list.

The recently released Bobby Hutcherson: The Best of the Blue Note Years spans nearly a decade of recordings with the record label beginning in 1965. The liner notes includes some background information from Down Beat magazine correspondent Mitchell Feldman.

Hutcherson glides through the 11 tracks from 11 different albums with the greatest of ease. His sidemen are no slouchers themselves, including pianists Herbie Hancock and Chick Corea, trumpeter Freddie Hubbard, saxophonists Sam Rivers and Harold Land, bassist Ron Carter, and drummers Billy Higgins and Joe Chambers.

On "Dave's Chant," it starts out with a Latin feel, but then jumps into cut-time swing, with Hutcherson playing a Charlie Parker-like solo on the vibes, paving the way for Land to take the solo reins.

Hutcherson's mallets travel so fast along the vibes during "Patterns," one would wish a movie camera had been trained on him during the recording session in order to see the brilliance.

He's also eager to branch into different genres, like on the funk-blues-injected "Ummh" or the Latin influence in "Rose Poses."

But this collection doesn't merely showcase Hutcherson. In most cases, he backs off to let the other players shine. Listen to Hancock's amazing solos on "Little B's Poem" and "Bouquet," or Rivers' and Hubbard's solos on "Ghetto Lights."

In all, it's a collection that features the best of this relatively unknown yet phenomenal vibraphonist.