Joan Torres's All Is Fused: The Beginning 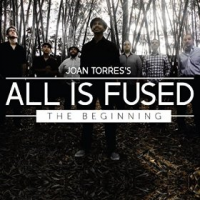 Joan Torres's All Is Fused lives up to its name, delivering music that's a melting pot of styles and sonic strains. Torres—a Dominican Republic-born, Puerto Rico-based bassist with a fondness for modern jazz, rock, fusion, and Latin strains—pens electric and occasionally episodic narratives that burn, bemuse, and burrow their way into the mind.

The Beginning is something of a misnomer, as it's actually the second album from this outfit: Before (Self Produced, 2012) came before it, introducing this band's brand of musical mayhem to the music-buying public. But All Is Fused's sophomore release is as good a place for a listener to start as any, with quick detours, slamming grooves, high proof electro-acoustic blends, forceful vamps, hypnotic tides, and more. One piece might reach its apex with a twin guitar attack ("Mess"), another might feature saxophone and bass sitting in a warm bath of electric piano ("There Was You"), and a third might appear restless, moving from an ominous greeting to an off kilter groove to an expansive setting to a drum solo-supporting vamp ("Summoning"). There's no predicting what will happen at any moment, as Torres is prone to musical detours.

Puerto Rican up-and-comers like saxophonist Jonathan Suazo and under-the-radar guitarist Sergio Gonzalez make notable contributions here, Torres's solid-to-slinky bass work serves as a signpost and directional beacon throughout, and Fernando Luis Garcia's drumming, volatile and mutable as can be, drives the band. There's also magic to be found beyond individual contributions, as many relationships are highlighted throughout. Note the way Garcia and Torres create a volley of bass, cymbals and drums around soloists; or the manner in which Suavo's suave horn melds with Gonzalez's guitar. It's these type of connections that enliven this music.

There are a few spots on The Beginning that cause some ear fatigue, as a vamp may last a bit too long ("Summoning") or a mood may be mined for more than it's worth ("Nightmare"), but these issues are few and far between. On the whole, The Beginning is an arresting album with much to offer.