By C. MICHAEL BAILEY
January 4, 2009
Sign in to view read count
We are currently blessed with an embarrassment of riches from the ongoing recording of Beethoven symphony cycles by two fine orchestras and conductors. In the recent articles Two Beethoven Fifths and Two Beethoven Firsts, we took the bull by the horns and faced what is probably the most recognizable piece of classical music on record, the Fifth, followed by Beethoven's freshman symphonic effort. Here we turn our attention to Beethoven's groundbreaking Third Symphony, the symphony after which music was never the same again.

Beethoven's Symphony No. 3 in E flat major (Op. 55) is considered by musicologists as the beginning of the end of the music's Classical era. Beethoven began composing the symphony in 1803 while in residence in Heiligenstadt. He had move to Heiligenstadt in late 1801 or early 1802 on the advice of his physician, Johann Schmidt, to rest his hearing, which had been failing since 1796, when he was 26 years old, the decline accelerating at the turn of the century.

It was in Heiligenstadt that Beethoven wrote his famous Heiligenstadt Testament, where the composer put to paper the reconciliation of his hearing loss with his determination to live for and through his composing. In the testament, Beethoven alluded to suicidal thoughts, a fact confounded by the sunny and determined music he composed while there in residence (consider his Symphony No. 2 in D Major, Op. 26).

Beethoven originally considered dedicating the symphony to Napoleon Bonaparte. Beethoven greatly admired ideals and ideology of the French Revolution. The composer saw Napoleon as the embodiment of such ideals until the leader proclaimed himself emperor, disillusioning the composer. As a result, Beethoven dedicated the work to Prince Franz Joseph Maximillian Lobkowiz.

Beethoven was disgusted when Napoleon proclaimed himself emperor. Urban legend has the composer scratching the name Bonaparte out so violently that he tore a hole in the paper. Beethoven changed the title to Sinfonia Eroica, composta per festeggiare il sovvenire d'un grand'uomo ("heroic symphony, composed to celebrate the memory of a great man").

Beethoven composed most of the symphony in late 1803, completing it early in 1804. The symphony was premiered privately in summer 1804 in his patron Prince Lobkowitz's castle Eisenberg in Bohemia. The first public performance was posted in Vienna's Theater an der Wien on April 7, 1805 with the composer conducting. Beethoven's originally scored the symphony for two flutes, two oboes, two clarinets in B flat, two bassoons, three horns in E flat and C, two trumpets in E flat and C, timpani and strings.

The current consideration focuses on Osmo Vanska and the Minnesota Orchestra (in the first American cycle in decades) on BIS and Philippe Herreweghe and the Royal Flemish Philharmonic on Pentatone. 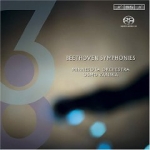 Osmo Vanska and the Minnesota Orchestra expand their sonic palette with their fine recording of the Third Symphony (coupled with the Eighth) as an SACD hybrid. Where their previously released Fifth Symphony was sumptuous but somewhat one dimensional in sound, the Third expands and clarifies these sonics through carefully crafted direction by Vanska and crack execution by the orchestra.

While Vanska insists on strict adherence the Beethoven's metronomic documentation, his first movement, the allegro con brio, is slightly slower than those employed by the period history performances popular in the 1980s and 1990s. His opening E flat major chords have command and authority and are briskly delivered before conductor and orchestra settle into a determined momentum. These first two notes have been the most important of the symphony performance since Felix Weingarten squeezed them from The Vienna Philharmonic on to acetate sides in the 1930s. Vanska readily acknowledges this.

The Marcia Funebre: Adagio Assai was a sensation when Beethoven introduced it as the second movement, blowing the sonata form perfected by Haydn and Mozart into ravenous particles. Vanska approaches the movement with a measured determination in the low strings. The conductor and orchestra continue to produce this performance in the third and final movements as if deftly carved from marble. Vanska achieves a heroic resolution to the Eroica that is as stately as it is modern. 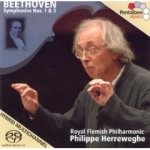 Philippe Herreweghe continues his Beethoven symphony survey from the vantage point of modern instruments confined by period practices. This was previously accomplished by Nikolaus Harnoncourt and his Chamber Orchestra of Europe on a set recorded during the early 1990s. At the time, Harnoncourt's interpretations made quite a stir. Herreweghe was doing the same thing at the close of the 2000s with the incorporation of natural horns and baroque tympani.

Where Herreweghe's previously release Fifth was a piece of music the listener could enter and walk around in, seeing (hearing) the Beethovenian nuances from several different angles, his performance of the Third Symphony is a sonic affair where the listener stands outside the work, circling it and seeing it as the monument it is.

The symphony is presented as a crystalline palace into which the listener may see (hear) its treasures without achieving the intimacy allowed in Herreweghs's Fifth. The Royal Flemish Philharmonic weaves a seamless tapestry of sounds with oboes becoming violas and low horns becoming cellos. Where Vanska is determined and thoughtful, Herreweghe again performs a high wire act: he initiates the symphony and allows it to develop with its own inertia, directing the performance only enough to keep it from spinning out of control. This makes for an exciting and essential reading of this Beethoven masterpiece.