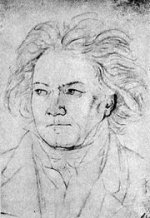 Before Ludwig van Beethoven (1770-1827) changed the direction of music forever, he was a pianist...and a pretty good one to boot. Beethoven could play fiddle too, but, then again, he was no Paganini (though his Violin Concerto in D major, Op. 61 has never been out of the repertoire and his 10 violin sonatas have always been popular with the virtuosi). Often overlooked by pedestrian classical music listeners are his monumental piano sonatas, 32 of them. Haydn's 62 (or 65, depending on who you ask) and Mozart's 18 piano sonatas are important and enjoyable, but Beethoven's 32 stand like a musical Mount Everest there to be scaled by the daring and talented.

Beethoven's first published piece of music was his Piano Trio in E-flat major, Op. 1, No. 1. The piece is one of three piano trios with the opus number 1, all which are thought to have been composed between 1792 and 1793, first performed in 1793 at the home of Prince Lichnowsky (to whom they were dedicated), and published in 1795. Using 1792 as a convenient starting point, Beethoven's first creative period is dated between this year and 1802. During this period, Beethoven composed music greatly influenced by Haydn (with whom he briefly studied) and Mozart (whom he admired)—his first two symphonies and piano concertos, his six Opus 18 string quartets, and the first 12 or 13 his piano sonatas, including the much celebrated sonata Pathetique.

Beethoven began to experience tinnitus (ringing in his ears) as early as 1796. Over the next several years, it became difficult for him fully to appreciate performed music and ultimately even to have a normal conversation. By 1802, the end of his first creative period, Beethoven's hearing loss provided the catalyst of crisis that resulted in his famous Heiligenstadt Testament. Beethoven came to reside in Heiligenstadt on the advice of his physician Johann Adam Schmidt in early May 1802, ostensibly to ease his increasing physical complaints. Beethoven remained in Heiligenstadt until the Fall, at which time he wrote his personal testament to his brothers, Carl and Johann.

In the Heiligenstadt Testament, Beethoven bemoans his brothers for misunderstanding him and expresses his despair regarding his progressive hearing loss...

"Ah, how could I possibly admit an infirmity in the one sense which ought to be more perfect in me than others, a sense which I once possessed in the highest perfection, a perfection such as few in my profession enjoy or ever have enjoyed. Oh I cannot do it; therefore forgive me when you see me draw back when I would have gladly mingled with you...

"But what a humiliation for me when someone standing next to me heard a flute in the distance and I heard nothing, or someone heard a shepherd singing and again I heard nothing. Such incidents drove me almost to despair; a little more of that and I would have ended my life—it was only my art that held me back. Ah, it seemed to me impossible to leave the world until I had brought forth all that I felt was within me..."

Paradoxically, Beethoven finished composing his sunniest symphony, the Second, and began on his monumental Third, while enduring the Sturm und Drang revealed in his testament. Surrounding this period was the composing of piano sonatas numbers 17 Tempest and 18 The Hunt. These sonatas represent a transition in Beethoven's piano composing that anticipates his blindingly creative late period.

Beethoven's Middle Period began shortly after Heiligenstadt, lasting until about 1814. It was the period in which Beethoven composed those large scale works emoting heroism and struggle. This period resulted in Symphonies Nos. 3 through 8, the last three piano concertos, Triple Concerto and violin concerto, five string quartets (Nos. 7-11), Beethoven's only opera, Fidelio, and several of his most famous piano sonatas, including Nos. 14, Moonlight, 21, Waldstein, and 23, Appassionata . The Moonlight sonata says it all. Beethoven is turning inward, relying on all that is left him, his mind's ear.

Beethoven's final creative period began around 1815. His deafness complete and tolerated, Beethoven's extra-musical attention was devoted to a custody battle for his dead brother's son, a circumstance that ended badly for all. All of Beethoven's compositions from this period are well described by Harold Schoenberg in his book, Lives of the Great Composers (Norton, 1997), which says of the "Revolutionary from Bonn's" final chapter:

"...(Following a fallow period are) the so-called last-period works—the last five string quartets and piano sonatas, the Diabelli Variations, the Missa Solemnis the Ninth Symphony. Here we are on a rarified plane of music. Nothing like it has ever been composed, nothing like it can ever again be. It is the music of a man who has seen all and experienced all, a man drawn into his silent, suffering world, no longer writing to please anyone else but writing to justify his artistic and intellectual existence. Faced with this music, the temptation is to read things into it in some sort of metaphysical exegesis. The music is not pretty or even attractive. It is merely sublime."

One listen to the Grosso Fuge string quartet or the Hammerklavier piano sonata compared with any earlier work and the truth of Schoenberg's observations is apparent.

In recent times, two interesting cycles have emerged. Andras Schiff on ECM and Idil Biret on Idil Biret Archive (distributed by Naxos) stand comparison in this complementary series to The Beethoven Symphony Series.