By NENAD GEORGIEVSKI
August 19, 2017
Sign in to view read count 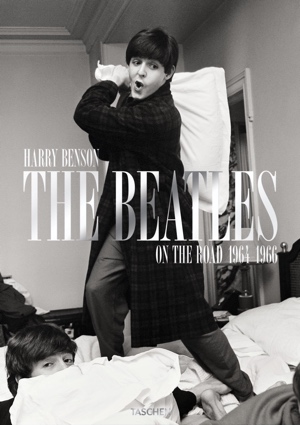 Feted British photographer Harry Benson first met the Beatles in 1964, when he was assigned to go to Paris and document their gig there at the Olympia Theatre. At the time the Beatles were rising stars, a phenomenon that has caught the attention of all major media outlets and they had been sending journalists and photographers to report about this band which was setting the world on fire, fast. Benson, who was on his way to Africa when his photo editor from the Daily Express phoned him about the assignment wasn't particularly interested in photographing musicians. After all, he was a documentary photographer. By his own admission, during the opening moments of the concert when he heard the band playing "All My Loving," while still in the hall he felt like he had the right story and that the trip will be worthwhile. And as some of the most interesting things in life come unexpectedly it opened up a door into an unusually exciting and colorful chapter in his illustrious career as a photographer.

Over the years, Harry Benson has photographed an incredible range of subjects and the list of people he has photographed reads like "who's who" of some of the most important and influential politicians, musicians, celebrities, sportsmen and newsmakers over the last five decades. From Winston Churchill and the Queen Elisabeth II to all US presidents starting from Eisenhower and Princesses Diana and Grace, from Frank Sinatra to the Rolling Stones. But Benson has captured his subjects during pivotal and seminal moments like Robert F. Kennedy's 1968 presidential campaign and the horror of Ethel Kennedy's face after the senator had been shot. He has worked as a war photographer on locations such as Bosnia and Iraq or Belfast during the Troubles. His work and numerous achievements were the reasons why he was awarded Commander of the Order of the British Empire, (CBE) by HRH Queen Elizabeth for his service to photography among other awards for his achievements over the years.

One of the most popular photographs ever taken of the Beatles is that when the band is having a pillow fight and are being silly, and nothing about it is staged. That evening the Beatles have found out that their song "I Want to Hold Your Hand" has climbed to the top of the charts in the US and that there is an invitation as well for the band to perform on the Ed Sullivan's show. The evident sheer joy and boyish optimism that would propel the Beatlemania phenomenon is said to have served as a balm to soothe the national grief and to boost America's national morale just 4 months after JFK's assassination. Maybe so, but the chief protagonists of this book were certainly aware of the tragedy but were certainly not aware of the importance of the events that were to follow. And it's this photograph that adorns the front cover of Harry Benson's collection of Beatles photographs, titled The Beatles -On the Road, 1964-1966 published by Taschen.

The photograph, which was chosen by Time magazine as one of the 100 that have marked the previous century, not only captures an important moment in the Beatles history, the joy and happiness of it, but it also showcases the access and trust that the Beatles have had about Benson to let him in their inner sanctum and take these photographs. Moments like this are almost impossible to find today. Much of today's press photographs are tightly controlled photographs and photographers rarely have an access to musicians' inner circles as in the past. Instead, the young photographer was granted a level of intimacy with these performers that is breath taking to behold.

This wonderful coffee sized book is beautifully designed and structured. It is organized both thematically and chronologically, and each group of photographs is divided into various chapters. During the two year period when these photographs were taken, Benson has enjoyed an unfettered access in private and he immerses the spectator in the band's inner circle with brilliant on-stage photos, backstage candid shots, intimate images from various hotel rooms as well as snapshots from press conferences, parties, newspaper clips, commentaries and more. Obviously, Benson has photographed the Beatles more artfully and more prolifically than anyone else. There is a comment by Benson in the book's introductory interview that one of the reasons why the band was very popular was the access they provided for every journalist who approached them. As it can be seen from the photographs, the occurrences in the Beatles' life and work were happening in a quick succession almost at the speed of life. From the first photographs he took of them at various locations in Paris, the first arrival in the US and the appearance on the Ed Sullivan Show that kick started the British Invasion, publicity photos, moments of joy and respite in Miami, meetings with fans, shooting of their first feature film "A Hard Day's Night" and plenty of other moments, Benson captures the band's early phenomenon in all its triumphant glory and sometimes triumphant silliness.

But every photograph in this collection is spectacular and electrifying. They all merge the sense of discovery, magic, revelation and Henri Cartier-Bresson's "decisive moment" idiom. The time period when these photographs were taken was the period of the first throes of Beatlemania. The Beatles were coming into prominence and have sparked a musical revolution. It is the start of what is considered to be the pinnacle of rock music's most heroic period of development. The band's 8-year reign in the '60s is a period when a seismic fracture in cultural history had happened. During this period, these four incredibly gifted individuals have contributed to an accelerated musical growth that morphed into a voyage into the unknown. They introduced fiction into the art of song writing and have revived the sensual. Because of that, there were out of the ordinary discoveries in melody, harmony, lyricism, rhythm, and production. Their music was great when it was made back then and it is still great and relevant 50 years afterward. It's a moment when the youth culture has matured into something adult. Fortunately, Benson was there with his trusted camera to witness and capture some of the band's most iconic moments.

Half a century later, the photos, many heretofore unpublished and all gorgeously produced, have been collected in this gorgeous book. With his unprecedented access, Benson has created a one-of-a-kind travelogue, capturing various moments of the unique and spectacular life of one of the most iconic bands in rock 'n roll history. As such it has a tremendous historical and cultural significance.