By MARK SABBATINI
August 21, 2004
Sign in to view read count 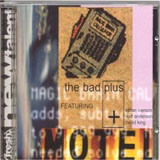 Is there another group that excels this well at not taking themselves seriously?

The Bad Plus are earning raves as either stupendous or just plain stupid for their radical interpretations of pop standards, making their major label debut on 2003's These Are The Vistas and following up with 2004's Give . But as is the case with many artists, there's also a number of small-label releases of interest to fans—and one is relatively easy to obtain without resorting to bootleg hunting or paying inflated prices for imports.

The Bad Plus (also known as Motel ), the group's 2000 debut album, contains all the madness of their latter big-label releases. Compositions are divided evenly between reinterpretations and originals. There only real shortcoming is the relatively short 45-minute eight-song length.

The raging debate is whether the Bad Plus represent a truly new voice and direction in jazz, or just undisciplined chord-crunching rock instrumentals. Convincing doubters is probably a futile exercise, so fans might as well have a good laugh—and then a serious listen—as the group turns songs like ABBA's "Knowing Me Knowing You" on their collective heads.

The group, as always, is most effective on reinterpretations because the easy frame of reference makes it much easier to hear their departure from the norm. But the originals—such as the lush ballad collides with hard rock/free jazz "The Breakout"—all certainly hold up on their own.

The opening ABBA tune gets the trio's usual discordant twists at mid-tempo, at times dragging like a tape player running on low battery power, with pianist Ethan Iverson and drummer David King dominating the foreground. Bassist Reid Anderson shines on a hyper-speed treatment of Rodgers and Hart's "Blue Moon" that makes the original sound like a carnival parody.

A couple of songs from their breakthrough These Are The Vistas are here, including the popular retake of Nirvana's "Smells Like Teen Spirit," but there's just enough difference in soloing—if not the main structure—to make the auditions worthwhile.

Overlooked by some, perhaps, is this group's compositional and improvisational skills. Those listening to more than the surface romps—which sometimes might be easier if the tempos were slowed to half speed—will hear complex and seemingly contradictory ideas performed remarkable well on the fly. If there is musical sophistication in the jam band concept, this trio does it as well as anyone.

Those with the interest and bankroll to explore more work by the group might look first to Iverson's 1998 album Deconstruction Zone , another disassembly of standards, then to 1999's The Minor Passions and Anderson's 2000 release The Vastness Of Space. Fans wanting a freebie and/or a chance to learn more about the group can watch a 54-minute performance/interview video from National Public Radio.

Knowing Me Knowing You; Blue Moon; 1972 Bronze Medalist; The Breakout; Smells Like Teen Spirit; Labyrinth; Scurry; Love Is The Answer.