The Bad Plus & Joshua Redman at the Michigan Theater 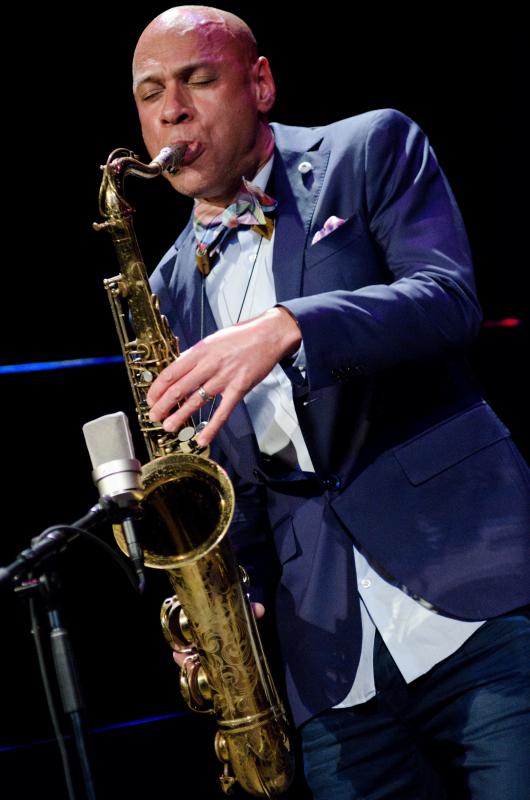 Over the course of some twenty years, The Bad Plus has honed its own brand of music making, tapping into a plethora of styles and grooves to develop their own musical hybrid. Pianist Ethan Iverson, bassist Reid Anderson, and drummer Dave King know how to push the envelope with their repertoire of original material and crafty alterations of material ranging from Stravinsky to Radiohead. It's surprising then that back in 2011 they asked tenor saxophonist Joshua Redman to join them for a week of shows in New York City. Coming from different stylistic philosophies, there was no doubt a synergy that emerged from this alliance. So, last spring, the collaborative foursome released an album that seemed to garner raves from both fan bases.

For the eighth and final show of an eight-day run of concerts, The Bad Plus and Joshua Redman took the stage at the Michigan Theater, both the trio and Redman marking their fourth appearances under the auspices of the University Musical Society. Over the course of eight original compositions, it became clear that this was not your typical joint effort. No one personality seemed to govern. Instead, a new organic whole emerged, spiced with various helpings of jazz improvisation, through-composed textures, and jaw-dropping cohesion.

Including several pieces from the aforementioned release The Bad Plus Joshua Redman, the evening actually opened with a Reid Anderson line from the group's 2001 self-titled debut. "Love is the Answer" starts as a whisper, Iverson's stately chords speaking in shades of Chopin, only to be interrupted by King's tom-tom ostinato and cymbal bell exclamations. With Redman in tow, this repetitive pattern served as a carpet under the saxophonist's yearning lines, the piece being fleshed out more deeply than in its original incarnation.

Iverson's "Faith Through Error" was a more bombastic affair, its' repetitive descending runs developing into a bombastic and atonal barrage of sound that was dominated by King's drums. Another riff would establish the near rock-like groove of "As This Moment Slips Away." It seemed as if the harmonies settled for a time, only to then shift to another area, each transferal allocating a mood change of sorts. Redman's 16th note flurries provided variegated colors that also managed to fill in the spaces of King's backbeat.

Surprisingly, Redman's own "The Mending" seemed more like a feature for Iverson. The restrained opening presented a rumbling line in the left hand that segued into a classical-like section that spoke to the pianist's heady skills. This was then followed by a swathe of collective trio brilliance before Redman's entry and a frothy conclusion. The piece might as well be considered the model for the way this quartet does business, attuned to each other and willing to engage in a free will offering of give and take.

The prolific Anderson penned the next two numbers starting with "Big Eater," an older piece from the trio's 2003 release These Are the Vistas. What almost sounded like the intervals violinists use when warming up flowered into a unique motif for this flag-waver, putting Redman out front for a spell with backing merely from bass and drums. The more stately "Lack the Faith but Not the Wine" displayed the saxophonist's full range from upper register cries to lowdown bass jabs, all of it done with precision and superb intonation.

Rounding the corner and heading toward home, a very sprightly "County Seat" sounded like Copland's "Hoedown" on steroids, a repeated two-note riff alternating with Iverson's pounding block chords. It was invigorating in its abandon. No wonder the crowd quickly rose to its feet and demanded an encore. The foursome then obliging with the heavy two and four backbeat of "Beauty Has it Hard." Complex, yet engaging, cerebral, while emotionally substantive; this quartet has morphed into a champion capable of considerable grandeur.