Maria Jacobs: The Art of the Duo 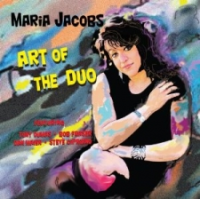 Simplicity in jazz performance is a sure bet when one has the chops to deliver. Jazz vocal in a duet format is one of the more exposed configurations, one where the singer liability is great. All mistakes, mis-steps and wrong notes are readily audible. Cleveland, Ohio native singer Maria Jacobs' fourth release features seven voice-guitar duets and one each with acoustic bass and piano. Jacobs is most refreshing because her voice is not over-trained and contains just enough grit to give it a lived-in sound that makes it at once familiar and friendly with a hint of sex and satin. Her rugged alto has a fearless quality that compliments the nine standards present here.

Jacobs, accompanied by guitarist Bob Fraser give the Schwartz/Dietz standard "Alone Together" a rigorous, almost roadhouse treatment that pushes the song to the edge of jazz. "Alone Together" translates into Bob Dorough's ballad, "Small Day Tomorrow," played with equal grit, though lighter on the rigor. "Too Close for Comfort" swings with a mighty momentum and played with greater finesse and a lighter touch. Jacobs responds in kind until the coda, where she pulls out all the stops and belts out the ending.

Jacobs pairing with guitarist Steve Cipriano provides a bouncing "It Could Happen to You" and a downright piquant "Summertime." The two remain pious on Phoebe Snow's signature "Poetry Man," where Cipriano's shimmering chords cradle Jacobs voice in the verse. The disc closes with the two non-guitar duets, Jacobs and bassist Tony Dumas on a strolling take of the Beatles' "I Will" and a slightly churchy treatment of "Yeh Yeh" accompanied by pianist Dan Maier. The Art of the Duo delivers a readily enjoyable catalog of the great American Songbook, presented in a fresh and refreshing manner.

Alone Together; Small Day Tomorrow; Too Close for Comfort; It Could Happen to You; Summertime; Nearness of You; Poetry Man; I Will; Yeh Yeh.

Title: The Art of the Duo | Year Released: 2013 | Record Label: Self Produced