By EYAL HAREUVENI
December 13, 2013
Sign in to view read count 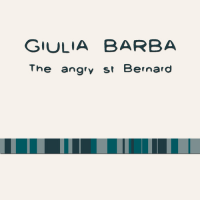 Italian reed player Giulia Barba uses her debut album to weave highly personal compositions that reflect her interests in visual arts, the European school of jazz, contemporary and world music and most importantly, her great passion for genre-defying music. The Bologna born musician decided to pursue musical studies after she majored in philosophy in the university of Bologna university. Only than she began studying music, first in Italy, than in Amsterdam and completing these studies in Stavanger, Norway, under the guidance of saxophonist Christophe de Bezenac and the bassist Per Zanussi.

Her debut album was recorded in Amsterdam with a European cast of like-minded, young musicians who share passion for music. All her eight original compositions unfold like colorful, nuanced dramatic stories, full of surprising, often eccentric shifts in energy, emotion and rhythm, leaving enough room for exploratory solos (as on most of the influential Dutch outfits). Her arrangements enable the septet musicians to charge the captivating dramas with energy and imagination.

Barba herself has a clear, round sound of her own on the baritone sax and the bass clarinet, best featured on "Me myself and my clari," where she recorded herself duetting on the two instruments, or her touching baritone sax solo "Ballad." She leads her band with mature confidence, still offering all septet members space to contribute memorable solos. Pianist Sri Hanuraga shines on the title piece and on "Ballad," vocalist Sanem Kalfa and drummer Joan Terol Amigó form a playful interplay with her on "Ik Word Better""and alto saxophonist Christian Ferlaino and trumpeter Gidon Nunes, along with Barba on the bass clarinet, turn "Fuio" to an enigmatic story, full of colors and shades.

The Angry St.Bernard; Ik Word Beter; Fuio; In a drummer's head; Grace; Me myself and my clari; Ballad; Sleeping.