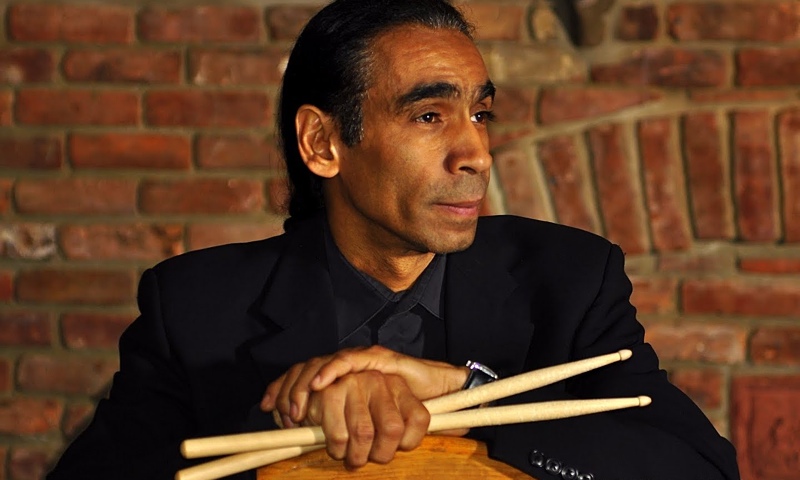 By DAVID A. ORTHMANN
September 10, 2013
Sign in to view read count
Accompanied by his father, a boy approaches the drum kit, stops and stares, transfixed by the array of shapes and gleaming surfaces. Without a moment's hesitation, Greg Bufford, the man sitting on the drummer's throne, makes eye contact, smiles, and proffers an impromptu demonstration of articulate, swinging brush strokes. The sounds satisfy the boy's curiosity and capture the attention of a ring of people near the tiny, makeshift bandstand, who are patiently waiting for the band to hit.

Tuesday nights at SuzyQue's BBQ and Bar in West Orange, NJ, are chock full of moments like this one. In a noisy warren where the divide between performers and audience is virtually nonexistent, Bufford is the linchpin for a confluence of jazz, entertainment, and revelry. He's building a loyal audience, one fan at a time, by juggling a variety of skills that are not unlike his sophisticated, polyrhythmic approach to drumming. Bufford leads a core band, graciously encourages singers, instrumentalists (and, in one instance, a tap dancer) to sit in, greets audience members by name in between selections, calls for requests, and makes announcements ranging from birthdays to cars left in the parking lot with the lights on.

A gregarious man who is apparently ready for anything, Bufford reacts to all manner of stimuli in ways that feel effortless and devoid of self-importance. Under Bufford's direction, extra-musical aspects seamlessly work their way into the performance. At the conclusion of one set, he plays precise time with one stick on the ride cymbal, and genially introduces the band with the mic in the other hand. On another occasion he asks a man to get the attention of a woman sitting on the next bar stool, in order to dedicate "I'll Remember April" to her. It's not a stretch to imagine that if a fire alarm went off, Bufford would lead the crowd outside to safety, without missing a beat.

In addition to long sets of fine music, positive vibes, and the camaraderie of an audience having a great time, there's another compelling reason to return to SuzyQue's week after week: The opportunity to listen and watch Bufford play the drums in close quarters, where you can catch every stroke and inflection. By any standard, he's an exceptional musician with a personal sound, conception, and feeling for jazz. Not unlike his spontaneous handling of the extra-musical aspects of the SuzyQue's gigs, there are two overlapping sides of Bufford's musical personality, which he projects simultaneously. On the one hand, he provides a firm rhythmic foundation and generously supports every musician on the bandstand. On the other, Bufford draws on a deep reservoir of rhythms—some boldly executed, others that barely register in the listener's consciousness— and executes them in mesmerizing ways.

During sets comprised of jazz standards and Great American Songbook favorites, called on the spot by pianist Dave Braham and bassist J.J. Shakur, the music doesn't make radical, disjunctive twists and turns. Regardless of the tempo or type of material, there's always a welcoming, feel good quality to the music. Straight-ahead swing, Latin rhythms, and funk grooves move forward in a steady, focused, and uncluttered manner. Working hand in glove with Shakur's line, Bufford never leaves any doubt of where the beat lies. In a matter of seconds, they can make the pulse sound fuller without messing with the tempo or changing the dynamic level. One night when Shakur was absent, the band's momentum didn't suffer; Bufford swung with grace and conviction in alliance with Braham's walking left hand.

In laying down a firm foundation on straight-ahead jazz selections, Bufford artfully employs one of the conventional tools of the trade, the ride cymbal. His time on the ride is firm and supple, declarative and relaxed. As it drives the music forward, the cymbal often converses with Braham's piano and Shakur's bass; leaving Bufford's other three limbs to make all kinds of spontaneous comments. The timekeeping function of the ride is often supplemented by Bufford's bass drum, which he frequently strikes on each beat of a measure, in a manner that is more felt than heard.

While he's mindful of the parameters of every song and embraces the timekeeper's role, there's an invigorating, mercurial quality to Bufford's drumming that can't be denied. He's always moving things around. One of the most arresting aspects of this restlessness is his use of various combinations of sticks, brushes, mallets, and bare hands on every conceivable surface of the drum kit. There's no way to predict the implements he'll employ or the surfaces he'll strike. One night during various points of a solo by guitarist Bob DeVos, while the tune moved between Latin and straightforward swing, Bufford's left hand struck and raked the snare drum head as a stick played straight time on the cymbal; two sticks executed wicked, chattering Latin beats; a stick made lightly crackling hits to the shell of a tom-tom while his left hand continued to work the snare; and his right hand articulately tapped out rhythms between two tom- toms. Because of Bufford's uncanny ability to keep the music grounded even as he moved around the drum kit, all of this activity didn't detract from the music as a whole.

A willingness to play things that aren't front and center, as well as a wide range of dynamics, constitutes two of the essential components of Bufford's style. During the ballad "Misty," the light sweep of a brush on the snare head and wispy strokes keeping time on the cymbal were barely audible, yet they made an impression. On the next selection, "Blue Bossa," in the midst of explosive Latin time on the ride cymbal and three quick belts to the mounted tom-tom, Bufford softly inserted figures with his bare hand on the snare drum.

Bufford has his own take on the traditional jazz drummer's practice of comping behind the soloists. A casual look at his left stick on the snare drum often reveals a virtual beehive of activity. Listen closely and you realize that, not unlike his four beats to a bar bass drum, a lot of these strokes round out the band's sound, yet they don't necessarily resonate clearly or make a distinct impression. In contrast to the ghost strokes, not unlike Philly Joe Jones (his teacher and mentor), Bufford sometimes makes one blunt strike to the snare immediately before the onset of the next chorus.

In another, very creative, approach to comping, Bufford often gives the music an extra dimension by executing specific patterns or ideas with one stick while maintaining the ride cymbal beat. Inside of Braham's solo on "Love Walked In," he found a brisk configuration between the cymbal, snare, and mounted tom, and then repeated it verbatim a couple of bars later. A particularly outstanding example occurred during pianist Dan Kostelnik's "Whisper Not" improvisation. Bufford made a single, distinct stroke to the snare, allowed a couple of bars to pass, and answered it with one hit to the mounted tom-tom. Despite the amount of time between the strokes, the connection was clear. It was as if he began to express a thought, paused to pursue other matters, and then completed the notion without any loss of continuity.

In listening to Bufford night after night, it's apparent that he hears everything going on around him; even more impressive is his perspicacity in responding to singers and instrumentalists. On Frank Noviello's rendition of "I'll Remember April," Bufford reacted to the singer's repetition of a word with three expertly timed snare drum accents. When DeVos' lines cut across the beat on "Have You Met Miss Jones?," the guitarist was greeted by one firm hit to the snare and another to the partially closed hi-hat. During trumpeter James Gibbs III's "Con Alma" solo, Bufford answered an isolated high note with a single belt to the mounted tom-tom.

When Bufford cuts loose on four or eight bar breaks and during extended solos, there's an ostensible loosening of inhibitions; yet, judging by the results, his mind is working as fast as his limbs. The breaks and solos are exciting, entertaining, and smart. To his credit, Bufford never sacrifices basic musical values in favor of "look at me" displays of technique. The intelligent organization of ideas is apparent, even as his rhythms rouse the spirit and resonate through the body.

A series of four bar exchanges with the band on "Broadway" contrasted rudimental beats to the snare that sounded like a string of firecrackers going off, and brief, articulate patterns between the snare and tom-toms. The common denominator of these two modes was a lack of excess of any kind; as always, Bufford's ideas made sense and his sticking was clean and precise. Near the end of "Joy Spring," eight bar trades with Shakur, comprised of complex snare drum figures and one and two stroke offshoots to the tom-toms, were greeted by enthusiastic applause.

An extended solo over Shakur's vamp on "Star Eyes" was a sterling example of Bufford's ability to utilize a particular structure for his own ends. Jarring single hits to the snare and tom-toms, busy, elaborate, five and six stroke patterns on the snare, neatly executed double stroke rolls, and a host of other beats, all worked around, landed on, and embroidered the vamp—and, all the while, Bufford never evinced any desire to break free of it.

One night between sets, Bufford spoke at length regarding his roots in the fertile Philadelphia jazz scene. He told stories about a number of luminaries associated with the city, surveyed the crowd with satisfaction, and then pointed out that a lot of great music in mid- to-late 20th century Philadelphia was performed in small bars and restaurants, not unlike SuzyQue's. Continuing to draw parallels between the past and the present, Bufford said he was pleased that people talked, laughed, ate and drank while his band performed. He might have added that on Tuesday nights at SuzyQue's, there wasn't any need for lectures about jazz as an original American art form, or attempts to place individual musicians in the scheme of the music's history. What matters is that people find it easy to connect and respond to the wit, soul, and taste of Bufford's brand of jazz.