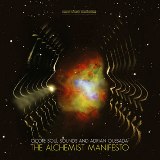 Ocote Soul Sounds was born of strange conditions—a failed biodiesel-fueled road trip that lead to jam sessions in Austin, TX, that in turn lead to the cross country trade of mp3s and song ideas, that gave birth to a surprising debut, last years' independently released Electric Tides. Masterminded by two of the freshest voices in new music today, Ocote Soul Sounds is in top form on The Alchemist Manifesto, a worldly mix of sounds found "at the intersection of the downtown dance floor, the sweaty basement bembé, and the smoldering campfire on a remote beach."

Martin Perna has made a name for himself in recent years by lending his flute to tracks by TV on the Radio, Scarlet Johansson, and others, as well as being a founding member of Sharon Jones' Dap-Kings and leader of Antibalas. Adrian Quesada is the mind behind two of Austin, TX's hottest bands, the Prince-approved Grupo Fantasma and deep-funk aficionados Brownout. Perna and Quesada together? Simply unstoppable, as evidenced by the stellar selections found on their sophomore Manifesto.

Perna and Quesada are in top-form on The Alchemist Manifesto. Collectively, from Antibalas to Brownout and all the many other projects these two brilliant artists are involved in on the side, it's clear these two are not running out of ideas any time soon. Manifesto is invigorating, the essence of cool, and a perfect soundtrack to your sultry summer.