The Acoustic and the Electric: Hristo Vitchev and Joe DeRose

By HRAYR ATTARIAN
January 13, 2014
Sign in to view read count
Bay area guitarist Hristo Vitchev is a prolific and consummate musician. Capable of both deeply introspective lyricism and electrifyingly gregarious fervor, Vitchev, nevertheless, maintains his individuality and hi, easily recognizable, impressionistic style in all of his diverse engagements. Two records released in 2013 superbly showcase his adroitness in and adaptability to various musical situations. 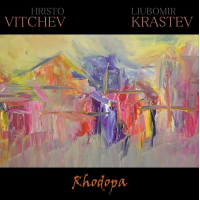 Rhodopa is a series of duets with ace clarinetist and fellow Bulgaria native Liubomir Krastev that seamlessly fuses spontaneous creativity with harmonies and folk melodies from their homeland.

The warm, poetic tunes are like fairy tales in verse. They are imbued with nostalgia, and shimmer with a variety of muted colors and sentiments. Interwoven, melodic lines construct the melancholic ballad "Devoiko Mari Hubava (Beautiful Young Lady)." Krastev's lilting, yearning improvisation unfolds over Vitchev's sparse strums and plucks while Vitchev's own multilayered ad-lib phrases form intricate patterns around Krastev's woody, resonant flutter. The result is an atmospheric and wistful track with strong east European hints that is emotive without resorting to pedestrian bathos.

This last statement holds true for the entire album as Krastev and Vitchev explore other moods. The serene and expressive "Hubava Si Moia Goro (You Are Beautiful My Forest) showcases Vitchev's agile, flamenco influenced guitar work on an otherwise Baroque- ish backdrop. Krastev's flute sounds almost like a recorder as he paints sun drenched and peaceful sonic landscapes. Meanwhile on the solemn and sublime "Silent Prayer" Krastev's softly undulating tones waver against Vitchev's vibrating strings in an spiritual celebration of abstract beauty.

There is also humor and subtle whimsy on this delightful disc. "Blues for Clever Peter" for instance, fuses the exuberance of early jazz with gypsy-esque playfulness while "Improvisation #2" channels the essence of an upbeat, folksy wedding dance.

This thematically unified work is a genre bending, elegant and satisfying opus and a new high for Vitchev who continues to excel himself on each fresh release. As a bonus, it introduces the master reedman Krastev to a wider audience.

As a sideman Vitchev switches gears to a suave, electric style that has a cool and soulful swagger on Peace Streets. Powerhouse drummer Joe DeRose leads this session with his propulsive percussion that is simultaneously primal and sophisticated.

"New Frontiers," for instance, features Vitchev's laid back, crisp lines that contrast nicely with the bubbling energy of DeRose's beats. This dramatic opener sets the mood for the rest of the record. The cinematic and sweeping "The Spirit of the Room," with a core of Latin tinged harmonies, features Vitchev's bluesy, blistering string work and saxophonist Dann Zinn's brassy, thick tone that blows with fervor and earthy grit. Keyboardist Murray Low 's hypnotic and otherworldly notes, meanwhile, bring an ethereal dimension to the tunes that DeRose's hauntingly raw drums take center stage bring to an inventive conclusion.

Most of the pieces have catchy melodic hooks like the classic rock influenced, brightly crackling "After the Storm." Vitchev's swirls of sound electrify and embellish the song as Low's acerbic keys add an angularity to it. Vitchev peppers his flights of ad-lib creativity with Far Eastern and Indian hints on the intense "Smiles for Miles." The homage to trumpeter Miles Davis has a tight, funky rhythmic structure and a memorable theme.

Another recurring feature is the utilization, sometimes a tad excessively, of hypnotic vamps to build impetus. This works best on "Silent Prayer" where the band's refrains have a chant like quality buoying Zinn's undulating sax. Bassist Dan Robbins' organic and lyrical reverberations serve as a stimulating conceptual foil to Zinn's soaring, airier phrases.

The momentum slacks on few of the ballads like on the unabashedly romantic "Just About 8" and "In a Single Breath." Both flirt dangerously with the so-called contemporary or smooth jazz but Zinn's improvisational rigor and DeRose's tight and original orchestration keep them from falling into that dubious domain.

Despite its minor flaws, DeRose's Peace Streets offers a delightful and stimulating experience. The recording's collaborative nature also highlights the superlative musicianship of all his Amici and their cohesive camaraderie.

Tracks: New Frontiers; So It Is!; Native Son; Native Reprise; In A Moment's Time; After The Storm; Smiles For Miles; Silent Prayer; Just About 8; The Spirit Of The Room; In A Single Breath; Peace Streets.