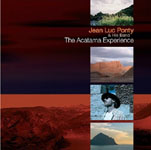 It's been six years since Jean-Luc Ponty last released a studio disc. Contrasting with the more heavily produced Life Enigma (JLP, 2001), The Acatama Experience places greater emphasis on the violinist's working band. It's also a record that consolidates his early years as a straight-ahead player with his 1970s fusion and later forays into funk and African rhythms.

And it's a true merging, not just an unfocused mix of diverse styles. Legendary bop pianist Bud Powell's "Parisian Thoroughfare, one of two pieces not composed by Ponty, is placed inside a buoyant funk setting that works perfectly and features strong solos from Ponty and guest guitarist Philip Catherine. Ponty's tone has always been rich, avoiding the shrill potential of the instrument, even when reaching into the upper register.

The harmonic language of "Premonition references Ponty's days working with guitarist John McLaughlin's Mahavishnu Orchestra, but the lines are cleaner, the playing less raw. It's also a deceptively complex piece, with Ponty and pianist William Lecomte demonstrating an ability to weave compelling narratives through its shifting rhythmic foundation and challenging changes.

"Point of No Return comes from a similar place, Lacombe's rapid arpeggios laying the foundation for Ponty's contrapuntal melody. Metheny-esque in its longer form and Latin-informed pulse, it features a powerful solo from 1970s collaborator Allan Holdsworth. Holdsworth seemed to plateau a few years back, but based on this and the Allan Holdsworth and Alan Pasqua featuring Chad Wackerman and Jimmy Haslip DVD the guitarist is clearly back—revitalized and willing to take more risks.

The beauty of The Acatama Experience is its ability to please Ponty fans that connect with different phases of his career. "Celtic Steps has the kind of catchy melody that made "New Country, from Imaginary Voyage (Atlantic, 1976), such a big hit. But the approach here—despite some fine electric piano work from Lacombe on other tracks—is largely acoustic. There's the energy of fusion without the volume, although bassist Guy Nsangué Akwa's clearly has chops to burn. Drummer Thierry Arpino and percussionist Taffa Cissé work hand-in-glove to create visceral grooves that are never heavy-handed.

Ponty's "Desert Crossing is an acoustic solo feature that shows he hasn't lost the spark that made his late 1960s recordings so rewarding. A virtuosic tour-de-force, its avoidance of effects places his more processed work in context. Despite some keyboard orchestration towards the end, "Last Memories of Her is largely a duet piece for Ponty and Lecomte that's hauntingly lyrical.

The Acatama Experience is a welcome return to form. Thoroughly engaging, it possesses the enduring compositional depth and unmistakable solo acumen that's kept Ponty's name alive, even during years when he's been away from the public eye.

Intro; Parisian Thoroughfare; Premonition; Point of No Return; Back in the 60