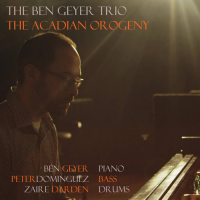 Pianist Ben Geyer is currently an Assistant Professor of Music Theory and Director of Jazz Studies at the University of West Georgia. Previously he taught music theory and aural skills at Oberlin College Conservatory and has a Ph.D. in Music Theory from the University of Kentucky. Geyer's research focuses on issues of temporality (time) in jazz, and his dissertation is called "Meter, Phrase, and Form in the Compositions of Maria Schneider." Geyer's debut album The Narrative ('18) was released in April 2018, with a follow up, The Acadian Orogeny ('18,) in May. Both have a distinct connection to nature and its many wonders. Joined by bassist Peter Dominguez and drummer Zaire Darden, the three navigate through one standard, "Giant Steps," and Geyer's originals all inspired by the Acadian orogeny itself.

"Reminiscing" is an original Geyer composition that demonstrates his ability to make a musical statement through subtlety and without overplaying, always in service of the music and the message. Dominguez and Darden are steadfastly supportive of Geyer's musical lines. At times the music suggests the musical values of a classical impressionist composition. Geyer's touch and tone evoke a sensitive and agile approach to his solo. The form has a nice flow and there are moments of transitions and the trio's ability to keep the music flowing with the same color and energy offers much to admire.

Geyer's original "High Tide" has the qualities and feel of a sophisticated late Blue Note-era tune, but his choice of harmony and tension and release brings the composition into today's modern jazz language. Dominguez's bass solo is relaxed and keeps the theme of less is more. Geyer's keyboard voicings, fluidity of his improvisations and the meticulousness of his interaction with bassist Dominguez and drummer Darden is buoyant and full of jazz colored vocabulary.

John Coltrane's "Giant Steps" is given the same impressionist subtlety avoidance of overplaying by the trio. The melody is given a nice arrangement and taken at a relaxed medium tempo. Geyer keeps the perpetual-motion clear as his figures dance and indeed suggest the underlying harmonies. Even when playing a selection from the jazz cannon like "Giant Steps" the trio maintains a transparency of sound with each instrument ringing out clearly and reacting to each other's musical ideas and colors.

Geyer has created a musical statement of depth and perpetuity with The Acadian Orogeny. The beauty of nature is reflected in each tune, with stunning results. The collaborative contributions and superlative playing by Dominguez and Darden adds to the experience.