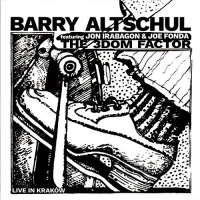 Barry Altschul's 3Dom Factor closed out the 2016 Krakow Jazz Autumn in fine style with this set. Recorded at the fabled Alchemia Club in the city's Jewish ghetto, the drummer leads his tightly knit combo through four originals and a Monk cover. It's a familiar program, as three of the pieces have been in Altschul's band book since the 1980s and all have appeared somewhere on the outfit's first two dates: The 3Dom Factor (TUM Records, 2013) and Tales Of The Unforeseen (TUM Records, 2015). But in the concert setting the group makes the most of the opportunity to stretch out and strut their stuff.

Over the four years since their inception, The 3Dom Factor has grown into a real unit, knowing who's capable of what, when and how. It helps that Altschul and bassist Joe Fonda previously worked together in FAB with the late lamented violinist Billy Bang for over five years from 2003. Both share a similar approach in terms of creating structure on the fly, as well as possessing an irrepressible sense of swing. A strong affinity has also developed with the third member of the trio, saxophonist Jon Irabagon. Altschul was part of the reedman's trio which cut Foxy (Hot Cup, 2010) and It Takes All Kinds (Irabbagast, 2013) confirming a mutual trust.

It's apparent right from the start that Altschul remains one of the most musical of drummers, as well as being a master of propulsive thrust. His solo introduction to "Martin's Stew" assembles rolls, thwacks, shakes and shuffles into a coherent whole, suffused by sensitive use of space. As the beat becomes more emphatic, Fonda leaps on it with a driving vamp, and Irabagon slots in the rapidfire free-bop theme. Thereafter the saxophonist demonstrates the almost ridiculous fluency which won him the 2008 Thelonious Monk International Jazz Competition, as he flits seamlessly between modern mainstream and free languages.

Monk's "Ask Me Now" receives a blues twist and spiky drum outbursts which belie the rubato balladry, while Altschul's portrait of an old flame "Irina" opens into a feature for Fonda's woody elasticity and melodic sensibility before Irabagon takes the tune elsewhere with his piping vibrato-laden sopranino. Altschul and Fonda seem to rejoice in playing with time, negotiating gear shifts impeccably, like the switch into the bluesy speeded up swagger of the second part of "For Papa Joe, Klook, and Philly Too," or the alternating burning and relaxed sections of "The 3Dom Factor." Whatever the pace, Irabagon reacts instantaneously, whether echoing Fonda's slurred notes or locking into Altschul's reiterated accents. It's all done with an unselfconscious joy which brings a smile to the face.

Martin's Stew; Ask Me Now; For Papa Joe, Klook, and Philly Too; Irina; The 3Dom Factor.